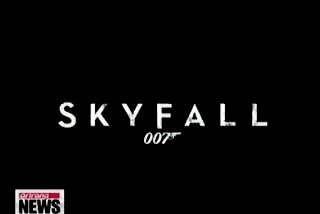 It's Monday and it's the start of a new week once again. And for our arts and culture segment today, Michelle Kim has brought us a film and an exhibition.

So what do you have for us today[Reporter : ] The latest Bond film has finally been released in Korea. This time out, Bond is battling a villain unlike no other he's ever faced in a race to save his closest ally and his cover.

A debonair Daniel Craig walked the red carpet for the world premiere of "Skyfall", the latest Bond film, last Tuesday with fellow cast members Judi Dench, Javier Bardem, Naomie Harris and Ralph Fiennes.
The film series marks its 50th anniversary this year and joining the cast to celebrate was a distinguished group of actors and actresses from previous Bond installments, including Sir Christopher Lee from "The Man with the Golden Gun", Eunice Gayson from "Dr No" and "From Russia With Love", and Shirley Eaton from "Goldfinger".
In describing the experience, Craig paid tribute to his fellow cast and crew members.

[Interview : Daniel Craig, Actor] "You know these movies are just one big collaborative process and we had the best in the business here so we had a lot of fun".

In Bond's 23rd outing, 007 is chasing a stolen hard drive packed with the names of undercover NATO agents. His search leads him to a masterful villain played by Javier Bardem.
This latest installment pays homage to some quintessential Bond characteristics -- the high-tech gadgets, his expensive taste in cars and his penchant for beautiful women -- but co-producer Michael G. Wilson says the film is more than a re-hashing of old storylines.

[Interview : Michael G. Wilson, Producer] "Well I think it's a fiftieth anniversary film so the writers wanted to have some touches from the old Bonds, some ideas, like the Aston Martin and that. But it's really an up to date contemporary film with contemporary issues".

Along with the film, there have been exhibitions, auctions, a documentary, and merchandising to mark the 50th anniversary of the Bond series all around the world.
"Skyfall" is now showing in theaters in Korea.

I haven't seen the film yet but I'm certainly going to try to catch it this week. How was it[Reporter : ] Well, I thought it was a fun film, but I have to say that I was expecting a lot more action from a Bond film. The storyline was great, and you will definitely learn more about the man and the agency through this movie, but some parts seemed a bit forced, and in comparison to "Casino Royale", the action scenes were not up to par. But it's definitely worth seeing and I'd encourage people to go check it out for themselves.

Well, I'll keep that in mind when I go to see it. And now moving on, what else do you have for us[Reporter : ] Switching gears to music, two J-pop groups have released albums and the "Skyfall" soundtrack is out. Here are the details.

Japan's veteran electro-pop girl group Perfume has released a new compilation album called "Love the World", the band's first album to be released outside of Japan. The title song has already topped the Oricon singles chart. The video for the song "Fake It" was created by 400 of the band's fans, who are also featured in it.
One of Japan's most successful pop groups, Morning Musume, released its 13th studio album, "13 Colorful Character", last Wednesday in Korea. The album features 12 dance songs, all of which accentuate the group's signature cute style, and comes with a DVD that showcases the 11 group's members and contains clips from previous concerts.
The Bond legacy lives on in music on a new album celebrating double-O-7's 50th anniversary.
The "Best of BondJames Bond: 50 Years, 50 Tracks" album is a two-CD set packed with the theme songs from the past 22 Bond installments.
The soundtrack for the current Bond film, "Skyfall", is out October 29th in the UK and November 6th in the U.S.

That seems like a wide variety of music. I'm most curious about the James Bond soundtrack. Can you tell us a bit more about it[Reporter : ] Well, first of all, the "Skyfall" soundtrack doesn't contain the theme song, so if you're looking for Adele's most recent hit, you'll have to look elsewhere.
The 50th anniversary album contains all the songs from all the Bond films, including the hits by Nancy Sinatra, Louis Armstrong, Tom Jones, Duran Duran and Madonna. The best thing about a compilation album like this is that all the best music from the Bond films in available in one place.

I will definitely have to get both the greatest hits album and the "Skyfall" soundtrack. And now to wrap things up, you have the events bulletin for us[Reporter : ] That's right. In the month of December, indie band Urban Zakapa will be holding a holiday concert on the 21st and 22nd. On the same two nights, Lotte World will be hosting its Hana Festival Booming Night event. Finally, singer Lee Eun-mi will be performing on the 29th of the month. Here are the details.

Indie trio Urban Zakapa will be holding a concert for the holiday season at Ewha Womans University's Welch-Ryang Auditorium on December 21st and 22nd. The trio will be singing beautiful acoustic harmonies,.. making for a great date night outing.

Lotte World will be hosting its Hana Festival Booming Night event at the Ice Rink Special Stage and the Garden Stage. The festival will feature a mix of international DJs and Korean indie bands, including Infected Mushroom, DJ DOC, Jangmi Yeogwan, Romantic Punch and many more.

Diva Lee Eun-mi will be holding a concert on December 29th to mark the end of the year. She will fill the Welch-Ryang Auditorium at Ewha Womans University with her husky voice and powerful ballads. She will sing her hit songs and the covers that she sang during her appearance on the TV show "I Am a Singer".