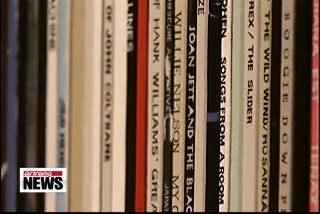 And now it's time for our regular arts and culture segment with Michelle Kim. Today she'll tell us about an exhibition that she went to and a concert by a famous pianist.

So what will you start us off with[Reporter : ] Today I'll give you a preview of an exhibition by artist Jon Widman, who has a talent for turning vintage items into art. Take a look.

Old books, album covers and other everyday items become works of art in the hands of Jon Widman, a New York-based artist whose exhibition "Remix" is currently showing at Gallery Em in Seoul.
Widman recreates these items on canvas using sophisticated color schemes and a restrained structure that gives each piece a whole new meaning.
Many of the objects in his paintings belong to him.
By recreating them as art, he is also paying tribute to their history.

In the eight paintings on display, Widman highlights the marks left by previous owners in order to emphasize what they've left behind.

[Interview : Jon Widman, Artist] "I just feel that things that are old and vintage have more humanness to it, so I'm just fascinated that ______ are old and have been owned by other people, then recycled and owned by me. I often wonder what other owners of particular books or records felt about that particular item so I wanted to capture some of the marks and recreate that on the canvas".

Through these paintings, Widman is encouraging viewers to reconsider the objects in their lives, the memories they may evoke, and the history behind each one.
"Remix" is Jon Widman's fourth exhibition at Gallery EM and will be on display until December 22nd.
It's interesting that album covers and boxes were used as inspiration to create these artworks. What was the exhibition like up close[Reporter : ] His artworks almost look like a snapshot of the items that he recreated. I loved how his paintings still managed to look vintage, despite his use of such vivid colors. In the paintings, the items have just enough wear and tear to keep the vintage feel and still look sophisticated.

Mr. Widman seems like a very detail-oriented artist. Could you see that in his artworks[Reporter : ] When I was first looking at his artworks I completely forgot that they were paintings. They looked so real. One of his paintings even had the little red sticker that you can see on groceries I thought it was real and I wanted to peel it off, but Mr. Widman himself had to remind me that it was just another part of his painting.

That must have been a funny moment. It's hard to imagine how a painting could be that realistic. And moving on, what else do you have for us[Reporter : ] Internationally renowned Chinese pianist Lang Lang is in Korea for a concert tomorrow. With his spectacular technique and superstar appeal, he's sure to mesmerize audiences of all ages.

It's been two years since his last concert in Korea, and now he's back.
Lang Lang, China's superstar pianist, will treat audiences in Korea to a performance with Maestro Kim Dae-jin and the Suwon Philharmonic Orchestra at the Seoul Arts Center on Wednesday.
Lang Lang has created a sensation in classical music with a magnetic persona that appeals to audiences of all ages and a playing style that sometimes has him leaping off the bench and onto his feet.
At a dress rehearsal for the concert, his rendition of Beethoven's Piano Concerto No. 5 was infused with the same kind of verve.
Afterward, he told the press what drives him to put so much energy into his music.

Lang Lang started playing the piano at the age of 3.
He had his debut performance -- and won his first competition -- when he was only 5 years old.
He went on to win the International Tchaikovsky Competition for Young Musicians at the age of 13 and later wowed the international crowd at the Nobel Peace Prize awards ceremony in 2007 and dazzled audiences again during the opening ceremony of the Beijing Olympics in 2008.
Lang Lang will perform Beethoven's Emperor Concerto, the Egmont Overture and Prokofiev's Piano Concerto No. 3 at the Seoul Arts Center on November 28th.

Reporter : ed: jenny] There's no doubt that Lang Lang is a piano genius, but critics have also questioned his showy performance style, saying it lacks sensitivity, while others have complimented him for his flair. Still others say, however, that he is maturing as an artist. This concert will be an opportunity for audiences in Korea to decide for themselves which side of the debate they're on.

Sounds like it will be a great concert, and it will be held tomorrow, right[Reporter : ] That's right. And for those of you living overseas, Lang Lang has concerts planned for next year in the U.S. His first concert there is on April 27th in Arizona and then he'll move on to Los Angeles and then New York.

Well, I'm sure many of our viewers will be looking forward to that. Thank you for today's previews and I'll see you tomorrow.

[Reporter : ] You're welcome. See you tomorrow, when I'll bring you the latest celebrity news from Hollywood and beyond.