At a glance: Looking at the relationships in "Marriage Over Love" 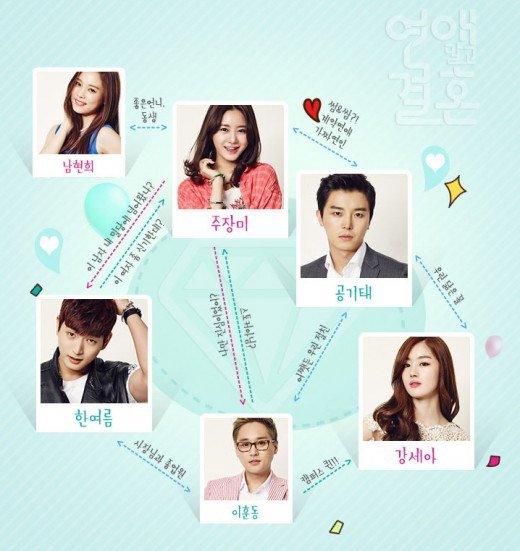 A chart showing the relationships between characters in one glance has been revealed.

"Marriage Over Love" started off with Joo Jang-mi (Han Groo) signing a contract with Kong Ki-tae (Yeon Woo-jin). Inside the reality of marriage, Han Groo, Yeon Woo-jin and other rising stars blend in together to create a fun and relatable drama.

The first week of the drama drew attention to the relationships between the characters. The six different characters with six different personalities are responsible for entertaining the viewers.

Looking at the chart, Han Groo and Yeon Woo-jin are linked with 'contract relationship' along with the word some. The chart then links Han Groo and Jeong Jin-woon with phrases, 'Did he fall for me?' and 'She's strange'.

Yeon Yoo-jin, who hates the thought of getting married and Han Seon-hwa (Kang Se-ah) are linked with 'We are alike', which hints that something is hidden between them. Han Groo and Heo Jung-min (Lee Hoon-dong) are both thinking, 'Was I the only honest one?' and 'Isn't he a stalker?' which reveals they started off on the wrong foot at the start of the drama.

Meanwhile, the third episode of "Marriage Over Love" officially marks the start of adventure of Han Groo and Yeon Woo-jin.

"At a glance: Looking at the relationships in "Marriage Over Love""
by HanCinema is licensed under a Creative Commons Attribution-Share Alike 3.0 Unported License.
Based on a work from this source