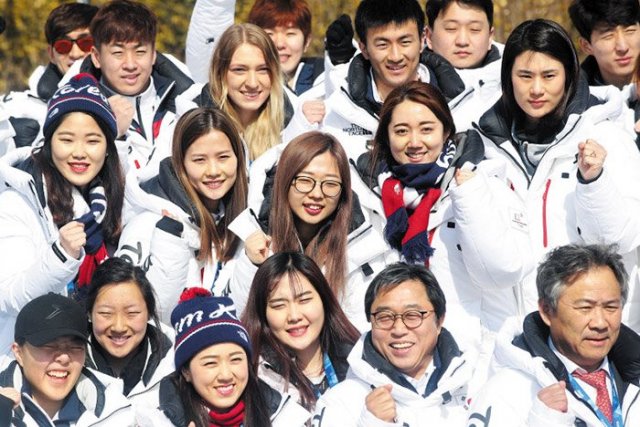 Athletes pose for a group photo at an event in Gangneung, Gangwon Province on Monday. /Yonhap

Athletes, coaches and other officials who participated in the Winter Olympics in Pyeongchang gathered Monday to mark the official end of the sports festival at an event in Gangneung, Gangwon Province.

Some 184 of them including the Olympic medalists attended the event, where they took pictures together and had lunch.

Notably, speed skater Lee Seung-hoon, who holds the record for most Olympic medals in his disciplines among Asian athletes, was mobbed by fans seeking autographs and asking to take pictures with him.

Women curlers, who stole the spotlight thanks to their winning streak during the Olympics, said they didn't realize how popular they were, as they turned off all their smartphones until the Olympics were over and left them with their coaches to fully focus on the matches.

They said they were surprised after belatedly finding their phones swamped with tons of encouraging texts.

"Athletes Celebrate Successful End of Pyeongchang Olympics"
by HanCinema is licensed under a Creative Commons Attribution-Share Alike 3.0 Unported License.
Based on a work from this source