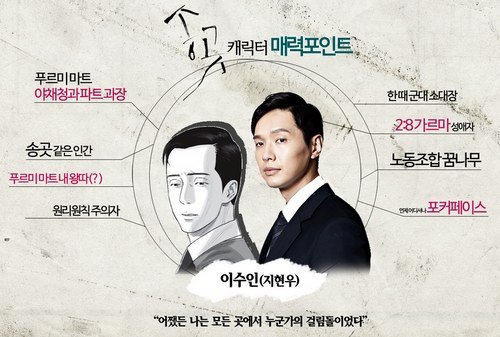 What are some keywords that represent Lee Soo-in by Ji Hyun-woo in "Awl"?

Appealing points of Lee Soo-in played by Ji Hyun-woo were pointed out by Signal Entertainment.

The picture released shows Ji Hyun-woo and the web-toon character of Lee Soo-in. Key words like 'loner of Prumi Mart', 'a follower of principles', '2:8 ways parted hair' and others make up the picture too.

Ji Hyun-woo is the chief of Prumi Mart with hair parted in a ratio of 2:8. However, he lacks sociability so he doesn't get along well with his employees.

According to sources, Lee Soo-in is an "Awl" himself. He looks difficult and hard to convince but actually he's the kind that will make a move first in unfair situations.

Meanwhile, "Awl" is based on a web-toon about employees of a big market.

JTBC drama "Awl" can be seen in October.

""Awl" Ji Hyun-woo as Lee Soo-in, what keyword?"
by HanCinema is licensed under a Creative Commons Attribution-Share Alike 3.0 Unported License.
Based on a work from this source