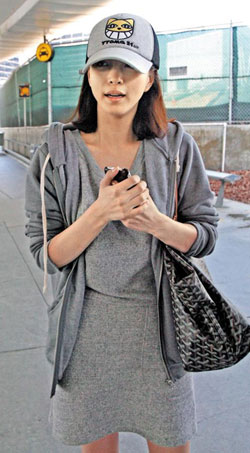 /Courtesy of the Korea Times

The actress Han Ye-seul, who went absent without leave from the set of a soap opera and headed to the U.S., on Tuesday said she will return to complete filming the flop. Han has booked a flight scheduled to arrive at Incheon Airport on Wednesday afternoon.

Han's management agency Sidus HQ in a press release said the actress "expressed her intention to return to Seoul promptly and devote herself to the soap until filming is complete". It said she was "exhausted from the hectic shooting schedule and unable to think clearly. She apologizes for causing damage to many people with her sudden departure".

The decision came after KBS, which broadcasts the series "Spy MyeongWol", at a press conference criticized Han as irresponsible and vowed to replace her.

Han had arrived in Los Angeles on Monday and was quoted by the Korea Times (the U.S. edition of the Hankook Ilbo) as saying, "I have given up everything. The conditions on the set were impossible". The actress added, "I hope that younger actors do not become victims like me". Earlier, other members of the cast also described chaotic conditions on the set.

But Lee Kang-hyun, an executive producer at KBS, denied Han was under too much strain. "We gave her up to two days off to film her TV commercials, so it's wrong to say the schedule was too harsh, especially since other actors and crew had to wait for her". Lee said the actress "must be on the set by Thursday morning and apologize for her irresponsible actions".

A KBS staffer claimed Han had been difficult from the start. "She refused to do slapstick or work with a particular actor, so we reworked the script to meet her demands", he said. The production company in a press release said it still intends to sue Han and file a complaint against her for obstructing business.

There are also rumors in the entertainment industry that Han ran off to get married to a businessman and had told other actors about her relationship and her wedding plans.

"Spy MyeongWol" is a comedy series based on the implausible premise of a North Korean spy falling in love with a South Korean star, and has had abysmal ratings so far.

"AWOL Actress Willing to Return to Set"
by HanCinema is licensed under a Creative Commons Attribution-Share Alike 3.0 Unported License.
Based on a work from this source