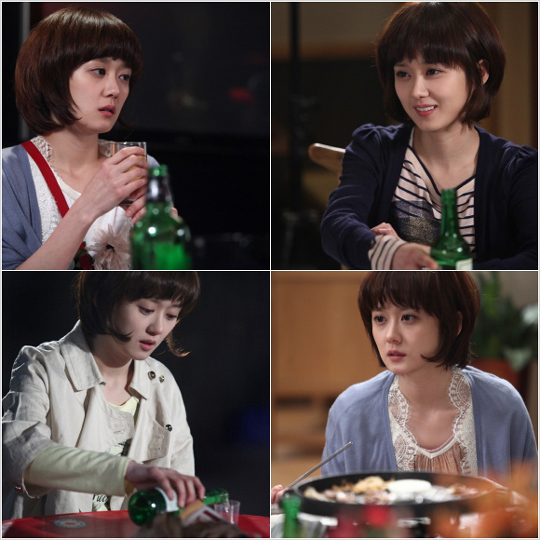 Jang Nara is 34-year old So-yeong who can't live without drinking in KBS new drama "Babyfaced Beauty" (written by Oh Seon-yeong and Jeong Do-yoon, produced by Lee Jin-seo and Lee So-yeon-I) which will first be aired in the 2nd of May.

The reason So-yeon drinks soju is because she was fired from her job at a fabric company she worked for 14 years after graduating high school for being old.

She doesn't forget soju even when she is eating pork at home. She ends up in the police station while drinking shot after shot with a man she met who likes younger women and she even passes out at a dinner table with the fashion company after drinking them in bombs.

Apparently she did these scenes without difficulty. She is also carrying out the act of vomiting on her partner Choi Daniel's face and boldly pointing her finger at her company employers casually.

Jang Nara's side explained, "Don't misunderstand that she is a heavy drinker from these scenes. Actually her alcohol limit is only I shot and she gets really red in the face so she can't drink much anyways. She knows how to enjoy a drinking atmosphere and gets comfortable with the people. Her acting comes from that".

Meanwhile, "Babyfaced Beauty" is a romantic comedy about a young looking single woman who overcomes her obstacles of being a high school graduate and a credit delinquent.

""Babyfaced Beauty" Jang Nara is 'soju girl + pass out girl'"
by HanCinema is licensed under a Creative Commons Attribution-Share Alike 3.0 Unported License.
Based on a work from this source