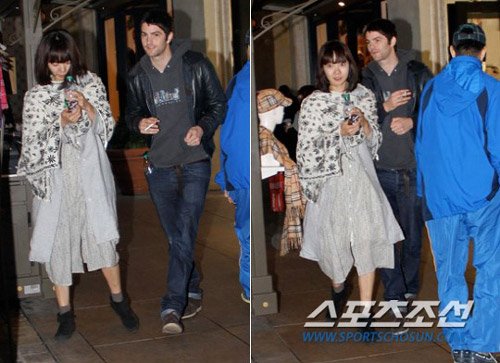 After a long period spent denying the rumors, actress Bae Doona has admitted to being in a romantic relationship with English actor and singer-songwriter Jim Sturgess.

She came clear during a press event on Tuesday for "A Girl at My Door", which has been invited to this year's Cannes Film Festival.

Along with the film's director and some of her co-stars, Bae fielded questions from the media and said that Sturgess is her boyfriend.

The British actor drew attention earlier this week by appearing with Bae at a screening of the movie as well as at other events in Cannes, thus fueling speculation that the two are in love.

They first met during the filming of "Cloud Atlas" in 2012 and have often been spotted together in Seoul and Hollywood since then. However, Bae's agency has repeatedly squashed rumors of them being an item.

"Bae Doona Admits to Dating Former Co-Star Sturgess"
by HanCinema is licensed under a Creative Commons Attribution-Share Alike 3.0 Unported License.
Based on a work from this source