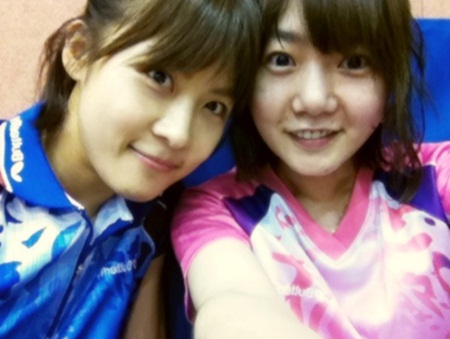 Actresses Bae Doona and Ha Ji-won's naked faces enviable to women in their 20s have the netizens attention.

Bae Doona uploaded a picture of Ha Ji-won and herself on her mini homepage under the title "Ji-won♡Doo-na" on the 26th.

In the picture Bae Doona and Ha Ji-won are wearing table tennis uniforms the color of blue and pink and smiling. These two have no makeup and their naked faces showed off milk-like skin, making those who look at them exclaim.

Those who have seen the picture say, "You two look so young", "My tweo favorite actresses. You're so pretty", "You get younger every time", "You guys look good together" and more.

Meanwhile Bae Doona and Ha Ji-won are currently shooting the movie "As One" which is based on the 1991 Chiba World Table Tennis Championships where the unitary inter-Korean team won for the first time.

"Bae Doona and Ha Ji-won 'actress in 30s' no make up love"
by HanCinema is licensed under a Creative Commons Attribution-Share Alike 3.0 Unported License.
Based on a work from this source