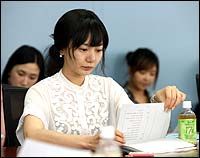 Model-turned actress Bae Doona is returning to the small screen through a new drama series "Gloria".

According to broadcaster MBC Tuesday, the 31-year-old actress will appear as the main character Na Jin-jin. Her last work on television was the popular "Master of Study" on KBS. This is the first time for her to appear in an MBC series in five years.

"Gloria" deals with the love lives and lifestyles of the people working at a nightclub. Na, played by Bae, is an aspiring singer at the age of 30 and starts her journey by singing at the club.

Na will be accompanied by her good friend Ha Dong-ah, played by actor Lee Chun-hee.

Filming for the drama will start later this month and start airing next month.

Bae, who made her debut in 1998 as a model, has starred in numerous drama series and films over the years. Her most famous role was in "The Host", directed by Bong Joon-ho in 2006. The 31-year-old won an award for her role in the Japanese film "Air Doll" at the prestigious Japan Academy Prize ceremony last year. Also a talented photographer, she has published several photo essays.
___________
Actress Bae Doona reads the script for the upcoming drama "Gloria" at MBC, Tuesday.
/ Courtesy of MBC

"Bae Doona returns to small screen"
by HanCinema is licensed under a Creative Commons Attribution-Share Alike 3.0 Unported License.
Based on a work from this source