BAE Doona's Air Doll to be Released in Korea 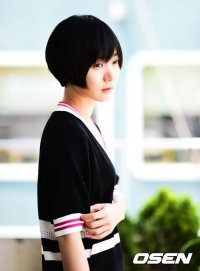 The long awaited Air Doll starring Korean actor Bae Doona is to get its Korean release. The actor has received a positive reception both internationally and in Japan where she has received 2 awards, including Best Actress at the Japanese Academy Awards and another at the Takasaki Film Festival.

The film, directed by Hirokazu Kore-eda and based on a Japanese manga, premiered at Cannes last May. It will be released in Korea April 8.

Back in Korea BAE is better known for her role as Nam-ju, the quietly spoken but competitive archer in Bong Joon-ho's "The Host", Korea's biggest ever grossing film. She also appeared in the same director's earlier effort "Barking Dogs Never Bite" (2000), in the Jeong Jae-eun directed "Take Care of My Cat" (2001) and as a heady social activist in Park Chan-wook's "Sympathy for Mr. Vengeance".

Air Doll, which recently played at Rotterdam, stars BAE as Nozumi, an inflatable doll owned by a middle aged man named Hideo who lives alone. Even though a doll, Nozumi is created with a heart and goes in search of the world when Hideo leaves for work each day. Encountering residents, ironically, more empty then she, Nozumi finds herself at a video store where she meets Junichi and falls in love.

"BAE Doona's Air Doll to be Released in Korea"
by HanCinema is licensed under a Creative Commons Attribution-Share Alike 3.0 Unported License.
Based on a work from this source