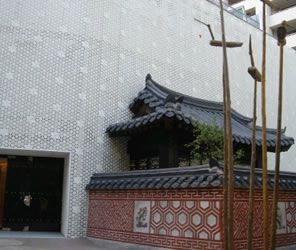 Celebrating Dano (the fifth day of the fifth month of the year according to the lunar calendar) on May 19, the special event featuring "Korea's food, clothing and housing via cinema" lasting through the 25th will provide customers a chance to "observe, feel and enjoy traditional Korean culture".

The designer of the movie costumes will also be invited to the Tokyo restaurant on the 19th for a reenactment of a traditional Korean wedding ceremony.