Bae Yong-joon and Park Soo-jin, why the rush? 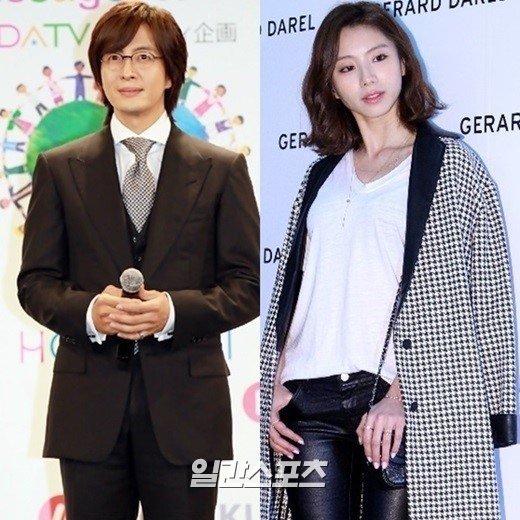 There's no exact date yet but they are getting married this fall. They haven't been together that long but they enjoy many things in common such as wine and golf. They have gotten to trust and love each other and this naturally led to their marriage.

KeyEast announced, "Details about the marriage will be announced soon. We hope everyone blesses them with their new beginning".

Bae Yong-soon debuted in 1994 with "Love Greeting". He then rose to stardom with the 1995 drama "Youth in he Sun". He then played Kang Joon-sang in the 2002 drama "Winter Sonata" with Choi Ji-woo and became a worldwide star. He earned the nickname 'Yonsama' in Japan and was treated almost like royalty. He is currently the leader of KeyEast which houses Kim Soo-hyun, Kim Hyun-joong, Han Ye-seul, Ju Ji-hoon and others.

Park Soo-jin was born in 1985 and went to school at Kyung Hee University, Department of Post Modern Music. She debuted in 2002 with Ayumi, Hwang Jung-eum and Yook Hye-seung as Sugar, a girl group. She then became an actress and starred in the drama "Queen Seon-deok" in 2009. She continuously starred in dramas like "Love You a Thousand Times", "My Girlfriend is a Gumiho", "Bachelor's Vegetable Store", "My Husband Got a Family" and more. She's currently starring in the Olive Channel TV show "Tasty Road".

"Bae Yong-joon and Park Soo-jin, why the rush?"
by HanCinema is licensed under a Creative Commons Attribution-Share Alike 3.0 Unported License.
Based on a work from this source