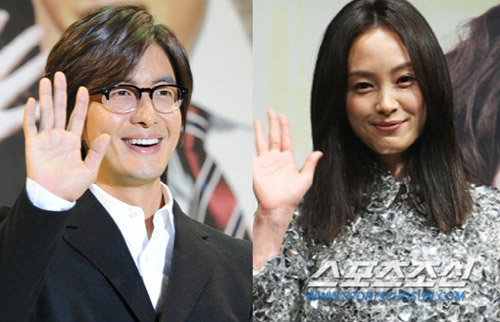 Korean actors Bae Yong-joon and Lee Na-young are to tie the knot in April, the Japanese weekly Asahi reported Wednesday, citing as evidence a house in Seoul's exclusive Seongbuk-dong that Bae recently bought.

This is not the first time that rumors about their impending wedding have been reported. They first surfaced among securities firms in 2008, but their management agency at the time strongly denied them. Last year, Bae himself dismissed the rumors as groundless, saying Lee is just managed by the same agency.

Bae's agency KEYEAST said the Asahi report is equally unfounded and his Japanese agency is dealing with the issue.

"Bae Yong-joon in Fresh Wedding Rumors"
by HanCinema is licensed under a Creative Commons Attribution-Share Alike 3.0 Unported License.
Based on a work from this source