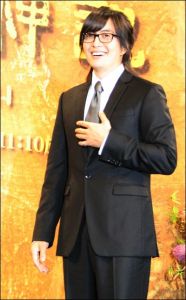 A phenomenal Korean star in Japan, Bae Yong-joon is the highest paid actor in Korea, raking in 250 million won ($171,600) per episode, an unusual release of the details of actors' payrolls showed this week.

Broadcasting stations and production companies have been raising concerns about costly payments to stars in recent years. They contend the payments create serious difficulties in financing television programs.

At the event, details of the payments for popular actors and actresses during the last two years were revealed by professor Kim Jin-woong of Sun Moon University.

Bae Yong-joon was found the most expensive star of all while he starred in the autumn hit of 2007, "The Legend". The number, however, is an approximation, as Bae was paid in a form of splitting profits between his management company and the production firm, Kim Jin-woong said.

Bae's estimated pay, however, is nearly double that of another actor Park Shin-yang, whose payment scuffle with a production agency drew attention in July. Park had filed a suit against the production to fully pay up the agreed 155 million won per each of the extended episodes of SBS "War of Money" in 2007.

Actresses were slightly lower in income, with Ko Hyeon-joung of "H.I.T" and Song Hye-kyo of "Worlds Within" each getting 35 million won per episode. Son Ye-jin reportedly earned about 30 million per episode of "Spotlight".

Among newcomers to the acting scene, the highest paid star was singer-turned-actor Yoon Kye-sang who starred in "Who Are You - Drama " and raked in 18 million per episode. Following Yoon was Jang Keun-suk of the latest hit "Beethoven Virus", earning 12 million per episode.

These lucrative payments were a sharp surge from just several years ago, where in 2001, the highest payment per episode was 4 million and 5 million won by top star Kang Soo-yeon for her work on "Ladies of the Palace". The report said that the price of hiring stars in television dramas began to skyrocket when Jeon Do-yeon began receiving 15 million won for "Lovers in Prague" in 2005.

"Bae Yong-joon is highest-paid actor"
by HanCinema is licensed under a Creative Commons Attribution-Share Alike 3.0 Unported License.
Based on a work from this source