Bae Yong-joon joined the shooting of drama 'Dream High'.... Did he changed his hairstyle? 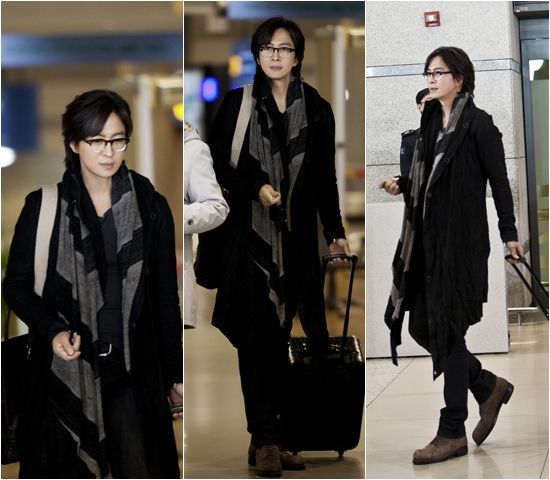 'Yonsama' Bae Yong-joon joined the shooting of KBS 2TV 'Dream High' to which he is also participating as a producer.

Bae Yong-joon recently confirmed his special appearance in 'Dream High' and joined the first shooting. Who he will play is Jeong Ha-myeong, the chairman of the school board of 'Gi-rin School of Arts'; this school is famous as the best star training school. Jeong Ha-myeong is the guy who grows students into stars.

The first shooting which was started at Incheon International Airport on December 7th, was about the comeback of Jeong Ha-myeon, who moved internationally, due to the audition for freshmen of Gi-rin School of Arts. Jeong Ha-myeong, who was pushed away because of all the top stars who were on same plane with him, is very flustered. This situation is unimaginable for Bae Yong-joon himself since wherever he goes, there are crowds of people who want to see his face.

Bae Yong-joon, who had 3 years of acting gap after MBC "The Legend", tried to change his image for 'Dream High' by trying different hairstyle and black long coat.

After the first shooting, Bae Yong-joon showed confident and honest attitude by saying, “Since it is my first shooting in 3 years, I feel nervous; not only nervous but he was also happy and fluttered. Also, he perfectly prepared himself before the shooting and checked monitor from time to time for the best shot.

"Bae Yong-joon joined the shooting of drama 'Dream High'.... Did he changed his hairstyle?"
by HanCinema is licensed under a Creative Commons Attribution-Share Alike 3.0 Unported License.
Based on a work from this source