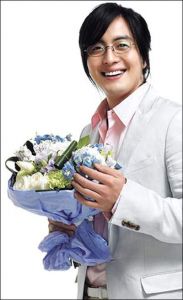 Actor Bae Yong-joon has joined the broadcasting business in Japan and will attend an opening ceremony there in October.

According to Digital Adventure on August 28, Bae and many other stars will attend the opening ceremony of DATV on October 1 in Tokyo. DATV is an entertainment broadcasting channel of Digital Adventure, which is the Japanese subsidiary of the cultural content company Keyeast, of which Bae holds the largest share.

The opening ceremony will be attended by Kang Yo-hwan and Lee Se-na, who played the leading roles in the animation film "Winter Sonata", popular fashion artist and soon-to-be TV host Ikko, who also acts as the PR ambassador for Korean tourism, and actor Ethan Ruan, who appeared in the Taiwanese drama "Fated To Love You".