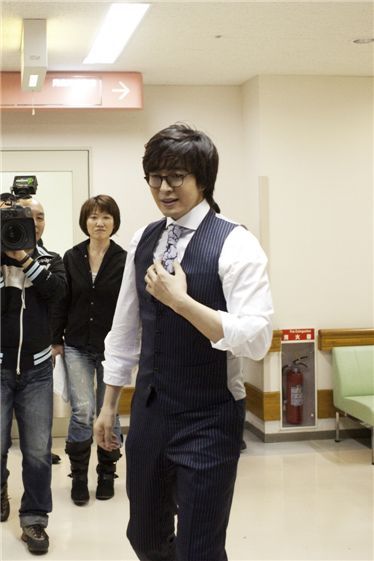 Hallyu star Bae Yong-joon visited Japan for a hotel launching party and charity work this week, according to his agency KEYEAST on Wednesday.

KEYEAST said in a press release that the actor flew into Japan on Monday, although not through Tokyo Narita Airport for security reasons, to attend the opening party for the Lotte City Hotel Kinshicho, held in Tokyo the following day.

At the event, Bae is said to have gifted the new hotel with a white porcelain pot made by a Korean artist, which will later be displayed at the site.

The actor then paid a visit to the Yokohama Children's Medical Center, where an intensive care unit (ICU) facility for premature newborns has been installed in his name. Since last year, the Korean star has been taken part in donating ICU facilities for infants to eight hospitals in Japan.

"There is a big shortage of medical beds and physicians for premature babies around the world", the actor was quoted as saying. "I am making the donations out of hope that people will now be more aware and more supportive of the infants".

Bae, 37, shot to mega-stardom in Korea and throughout Asia with the success of 2002 KBS TV series "Winter Sonata" and gained a huge following in Japan in particular, where he earned the nickname "Yonsama".

He has also been actively promoting Korean culture in Asia, publishing a photo essay titled "Discovering the Beauty of Korea" last year, which contains self-taken photographs of various cultural artisans that the actor met during his year-long travel around the country.