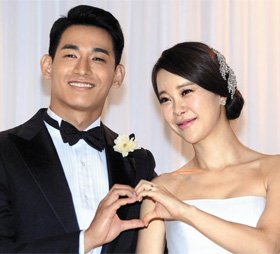 Jung Suk-won (left) and Baek Ji-young pose before their wedding in Seoul on Sunday.

Singer Baek Ji-young and actor Jung Suk-won got married at a hotel in Gwangjang-dong, Seoul on Sunday.

At a press event before their wedding, Baek said she is confident she has met her Mr. Right and that spending the rest of her life with Jeong is the right choice, even though their nine-year age gap has caused quite a stir.

She described him as someone who she can lean on, like a friend or sometimes like a father figure.

Already three months into her pregnancy, she said she hopes to give birth to a baby boy who looks like Jeong.

"Baek Ji-young, Jung Suk-won Exchange Wedding Vows"
by HanCinema is licensed under a Creative Commons Attribution-Share Alike 3.0 Unported License.
Based on a work from this source