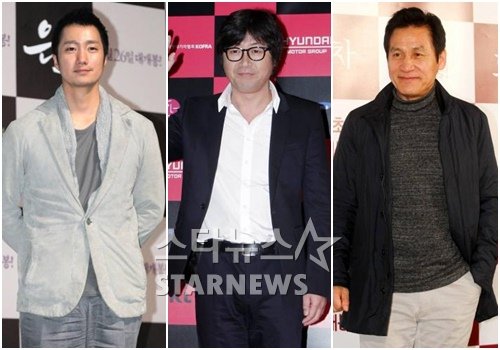 Who will become the Best Actor at the Baek Sang Arts Awards?

The competition between nominated actors and actresses for the 48th Baek Sang Arts Awards is intense.

The most competitive category is of course, the Best Actor Award. Park Hae-il from "Arrow, The Ultimate Weapon", Kim Yun-seok from "Punch", Ahn Sung-ki from "Unbowed", Choi Min-sik from "Nameless Gangster" and more have been nominated for this category.

Park Hae-il gathered 7,780,000 audiences with the movie "Arrow, The Ultimate Weapon" last year and he is very likely to be awarded the Best Actor. Kim Yoon-sik from "Punch" is also a touch match as well as Ahn Sung-ki from "Unbowed".

The nominees for Best Actress are almost predictable. Uhm Jung-hwa rose to the nickname 'hit queen' with her movie "Dancing Queen" which gathered 4 million audiences. Kim Min-hee's impressive performance in the movie "Helpless" despite her small amount of appearances, left a good mark.

The Best TV Female are Kim Hyun-joo from "Twinkle Twinkle", Gong Hyo-jin from "The Greatest Love", Moon Chae-won from "The Princess' Man", Kim Sun-ah from "Scent of a Woman" and Soo Ae from "A Thousand Days' Promise".

Gong Hyo-jin proved her abilities with the drama "The Greatest Love" and Soo Ae performed the incredible act of an Alzheimer patient in the drama "A Thousand Days' Promise". Kim Sun-ah had to lose a great amount of weight for the role of a dying woman in "Scent of a Woman".

The same goes for the Rookie Award too. For actors they are Lee Je-hoon from "Architecture 101" and Kim Sung-kyun from "Nameless Gangster".

The Best Rookie Actress also competes between "Architecture 101" and "Nameless Gangster". Suzy and Kim Hye-eun from both these movies have left a deep foot print in the movie history. Go Ara from "Papa - Movie" and Kang So-ra from "Sunny - 2010" are also unavoidable.

"Baek Sang Awards 2 : Park Hae-il VS Kim Yun-seok close game for Best Actor Award"
by HanCinema is licensed under a Creative Commons Attribution-Share Alike 3.0 Unported License.
Based on a work from this source