BaekSang Arts Awards, there is no unexpected change 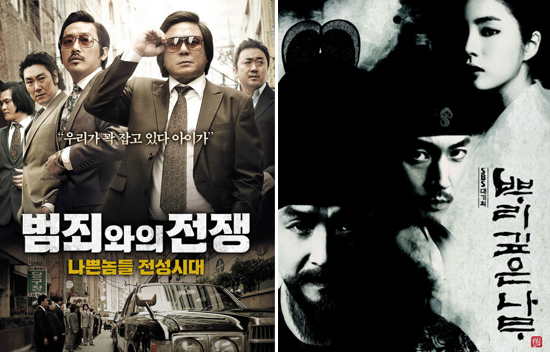 The Best Pictures that at the 48th BaekSang Arts Awards chose were "Nameless Gangster" and SBS "Deep-rooted Tree".

Held in the Seoul Olympic Park Olympic Hall on the 26th, The 48th BaekSang Arts Awards was led by Lee Hwi-jae and Kim Ah-joong. Appointing 25 winning works and winners in TV and movies, the event chose those that were of hot issue and popularity without unexpected changes.

In the movie category, "Nameless Gangster" with Ha Jung-woo and Choi Min-sik was awarded the Best Picture. "Nameless Gangster" is a hit movie with a total of more than 4 million audiences, about the loyalty and betrayal of those who controlled the area of Busan from the 1980s to the 90s. The biggest boss and fighter of a gangster organization Choi Hyeong-bae was played by Ha Jung-woo and king of lobbying who dreamt of becoming number one in Busan Choi Ik-hyeon was played by Choi Min-sik.

A Director's Award went to "Unbowed" about the crossbow terror by Chung Ji-youngwho came back with a movie for the first time in 13 years. The other Director's Award went to Byeon Yeong-joo from "Helpless" and the Grand prizes went to Ahn Sung-ki from "Unbowed" and Uhm Jung-hwa from "Dancing Queen". Suzy from "Architecture 101" and Kim Sung-kyun from "Nameless Gangster" won the Rookie Awards and Jang Keun-suk from "You Pet" and Kang So-ra from "Sunny - 2010" won the Popularity Award.

The Best Actress in TV went to Gong Hyo-jin from "The Greatest Love" and The Best Rookie Award went to UEE and Joo Won from the KBS drama "Ojak Brothers". Park Yoo-chun (MBC "Miss. Ripley") and Park Shin-hye (MBC "Heartstrings") were awarded the Popularity Award for two years in a row at the BaekSang Arts Awards.

This day's event led by Lee Hwi-jae and Kim Ah-joong, proved that it was truly a celebration of the stars from the mass number of top stars that participated. Male band CN Blue and comedians Shin Bo-ra, Park Sung-kwang, Jeong Tae-oh and more made excellent performances as well.

Meanwhile, BaekSang Arts Awards is an award ceremony selecting prizes to those projects, casts and staff of movies and TV for the past one year with the motive of contributing to the development in quality of future movies and TV. The first event was held in 1965.

"BaekSang Arts Awards, there is no unexpected change"
by HanCinema is licensed under a Creative Commons Attribution-Share Alike 3.0 Unported License.
Based on a work from this source