Behind Rise of Korean Films 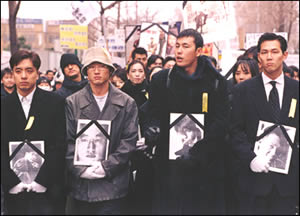 A row of actors, from left, Kim Seung-woo, Park Shin-yang, Jung Woo-sung and Lee Jung-jae carry their own portrait scroll in a rally against scrapping of the screen quota system in central Seoul in 2001. The Korean film industry was under constant challenge from outside, especially during the 1980s and 1990s.
/Courtesy of Coalition for Cultural Diversity in Moving Images

"Explosive'' isn't an exaggeration when describing the growth of the Korean film industry in the past few years. In 2000, the number of theatergoers for Korean films was around 22 million. That figure doubled in the next year and exceeded 60 million in 2003. It was over 80 million in 2004.

The nation is now one of few bastions in the world in which local films exceed Hollywood blockbusters in popularity. In 2004, Korean films earned around 500 billion won at the box office compared to only 34 billion won earned by foreign movies.

The nation's film exports, which were minuscule even a few years ago, have soared in the last few years and reached over $67 million last year. The surging exports made Korean film posters and advertisements omnipresent around East Asia.

Looking back on Korea's dazzling film exploits, few would believe that it was on the verge of extinction just a decade ago, bulldozed out by foreign flicks and government policy blunders. The domestic market share of Korean films was as low as 15.9 percent in 1993 with the rest of the market dominated by imported films. To the gloom of filmmakers of that era, Korea's share had plunged from 39.9 percent in 1983.

"Study of Korean Film History 1980-1997'' is a scrupulous report delving into the days of Korea's shrinking film industry which, in one respect, created the seeds of today's renaissance. Consisting of four sections, each written by different authors, the book deals with the trend from aesthetic, industrial and critical aspects of the double-faced era.

Cho Jun-hyoung, a researcher at Korea Film Archive, says Korea's film industry experienced a series of shocks during the period, which posed challenges to and somehow paradoxically strengthened the fundamentals of the industry. The changes, he wrote, included the advance of foreign distributing companies into the Korean market, the chaebol's investments and pullback, inroads made by financial capital, a second wave of chaebol investment, gradual lifting of censorship and the introduction of the government's industry-boosting policies.

"Some changes seemed favorable, some seemed to be disadvantageous. However, in the end, the Korean film industry melded all the factors to its advantage and headed in a rational direction,'' Cho wrote.

How was that possible? Interestingly enough, Cho noted, it was luck. Whenever the industry reached a deadlock, there always appeared an unexpected exit. For example, when the government liberalized the importation of foreign films in 1984, Korea's feeble film industry, already beleaguered by just-introduced color television, was undermined even further.

To make it even worse, major foreign distributors made inroads into the market with vast capital and sophisticated promotion skills. Then a savior emerged _ the video market. The burgeoning market provided breathing room for the cash-starved industry.

The introduction of cable television also provided an unexpected break for filmmakers. Then the chaebol with their deep pockets, eyeing the potential motion picture market, moved in to the film industry.

"Without those unexpected factors, the film industry in mid and late 1990s would have been devastated,'' Cho wrote.

Even after the financial crisis in the late 1990s when the chaebol began to withdraw their investments from the market, fortune did not desert the genre. The newly elected administration filled the vacuum left by the chaebol with a series of industry-wide policies. And just in time "Shiri'' attracted over 5 million theatergoers, demonstrating the genre's financial possibilities.

"Stable investments from the conglomerates and improvements in the production environment jointly paved the way to the renaissance in the 2000s,'' Cho noted.

Another author Yu Gi-na, professor at Dongguk University, stressed that in the 1990s Korean filmmakers gradually started to overcome the influx of foreign films and regain lost ground. She pointed that the liberalization of the film industry from 1984 spawned various filmmaking companies and invited new capital to revitalize the industry.

On top of that, many pro-democracy student activists turned their eyes to the power of popular cultures and a number of talented artists were attracted to the genre. She also noted that freedom of expression, acquired as the nation's democratized, has contributed to the now flourishing film industry.

The book illustrates the ups and downs of the two decades of Korea's film industry, which laid the foundation for the current Korean film success story. It is the second report published by Korea Film Archive with the first volume on the Korean film history in the 60s and 70s, published in 2004. The series is expected to be a landmark in the further study of Korean films in cross-cultural, Asian or World context, as the nation's film industry is no longer confined to the peninsula.

"Behind Rise of Korean Films"
by HanCinema is licensed under a Creative Commons Attribution-Share Alike 3.0 Unported License.
Based on a work from this source