Behind the Scenes of TV Extras 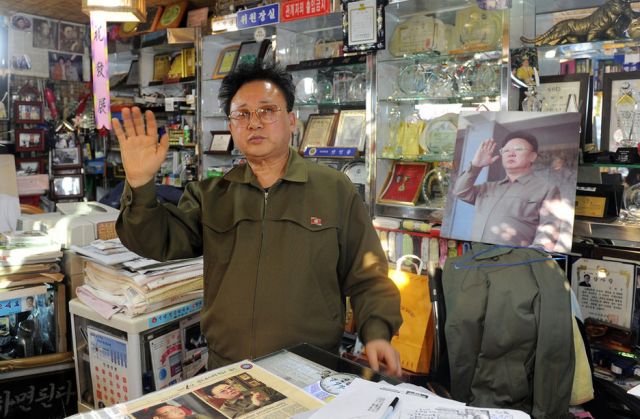 Korea, apparently, has one the most notorious men in the world.

[Interview : Kim Yeong-sik, Impersonator of Kim Jong-il] "I realized that curling my hair made me look a lot like Kim Jong-il, so that's when I started to impersonate him more seriously".

Since his debut in 1995 in the movie "Mugoonghwa-Korean National Flower", he's been featured in various TV dramas and films as North Korea's leader Kim Jong-il. He's even made an appearance in a Middle Eastern chocolate commercial and various Japanese TV shows.

[Interview : Kim Yeong-sik, Impersonator of Kim Jong-il] "I got so many phone calls when Kim Jong-il died that I couldn't even work. I felt bad, too, when people worried about me".

Kim Yeong-sik[김영식]'s success, however, is the result of many years studying Kim Jong-il's wardrobe and appearance.

[Interview : Kim Yeong-sik, Impersonator of Kim Jong-il] "This is how he looked when he gained weight".

[Interview : Kim Yeong-sik, Impersonator of Kim Jong-il] "And this is how he looked shortly before he died".

to his later days, Kim Yeong-sik [김영식]'s got all of them covered.

Even after the death of Kim Jong-il, his schedule is busy as ever.

[SOV]
[Interview : ] "I'm amazed that South Koreans got me out of that glass coffin".

In fact, his reputation has sky-rocketed since the passing of the late Supreme Commander.

[Interview : ] "I was really shocked at first. He really does look like Kim Jong-il".

[Interview : ] "He looks just like him. I was confused at first, but then I realized that he's just an impersonator of Kim Jong-il".

These celebrities seem to have hands that are just as lovely as their faces.
These hands, however, actually belong to

She prizes her hands more than anything.

They're in such high demand in TV commercials and magazines, so she takes greater care of her hands than any other part of her body.

[Interview : ] "I came here to get more specialized care, like moisturizing and exfoliation".

Anyone could tell that her hands are extraordinary. But what are the criteria for pretty hands.

[Interview : Park Eun-gyeong, Director Sassi Beauty Spa] "You can tell a hand model just by looking at her hands, but just take a look at the length of her nails. We call this "body" and Choe Hyeon-suk's body is 1.3 to 1.5cm. Her fingers are also half as long as her entire hand. These long fingers are what make her hands pretty".

Even during her downtime, she continues to lavish her hands with moisturizers and hand creams.

She carries eight different kinds of hand care products everywhere she goes, and has 30 more back home.

But how much are her hands worth.

[Interview : Seo Su-min, Financial planner] "I can't say for sure because there are no insurance products for body parts in Korea. But since her hands hold an economic value, I think she can get an insurance for up to 10 times her current annual income".

[Interview : ] "Hearing an expert's evaluation made me realize I should take better care of my hands".

She transforms into a professional hand model on the set.

She expresses beauty through her hands.

[Interview : ] "You might think anyone can do it, but nothing could be further than the truth. That's why I pride myself in what I do, and I feel great when my hands put the right finishing touch in a commercial".

These hands, taken from a scene in a historical drama, also belong to someone who isn't the actress herself.

It's calligrapher Lee Jeong-hwa-I [이정화].
Her handwriting has appeared in various TV dramas like "Dong Yi" [동이], the "Deep-rooted Tree", and the "The Sun and the Moon".

[Interview : Lee Jeong-hwa-I] "So Yi played by Shin Se-kyung in "Deep-rooted Tree" is a mute. So there were a lot of scenes of her writing, and I would be behind all of those scenes. I remember Se-kyeong looked after me throughout the whole process".

One might think that her job is simple, but she actually faces a lot of difficulties on the set.

[Interview : Lee Jeong-hwa-I] "I can't really see the camera since I sit on the right side of the actress, while the camera stands on the other side. So I remember how hard it was to sit and write in an uncomfortable position when they were trying to get close-ups".

Her handwriting must change with the character's social status and personality. She therefore has to train herself in different kinds of handwritings.

[Interview : Lee Jeong-hwa-I] "This is how court ladies wrote back then. It looks very neat yet elegant. It's more like a painting, unlike peasants' handwritings".

Although it's the same meaning, they evidently look different.

[Interview : Lee Jeong-hwa-I] "I'm still in the process of learning Chinese characters. My dream is to become a calligrapher who can promote the beauty of Korean calligraphy to the world".

The work and dedication of TV extras behind the scenes is truly inspiring and admirable. It's something we all can learn from.

A classmate of mine had a mother who was a foot model.
Must be nice if she could try on some great shoes.
Just goes to show skills can be applied almost everywhere.
Well stay with us up ahead we're going to talk about Korean medicine.