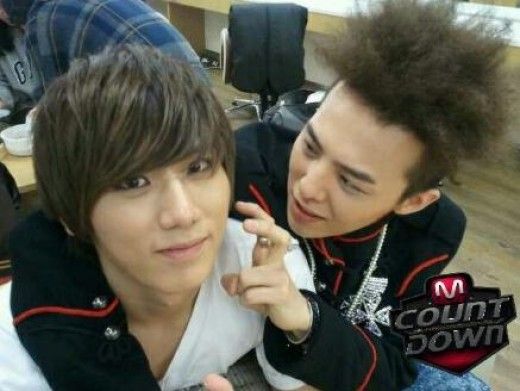 A photograph of Big Bang member G-Dragon and BEAST member Hyun-seung in the waiting room of Mnet's music cable channel show "M! CountDown" has been unveiled.

The official "M! CountDown" Twitter site revealed the picture of G-Dragon showing the rabbit ears sign with his hand while having his right arm around Hyun-seung with a comment below saying, "G-Dragon, where is your fellow member T.O.P (Choi Seung-hyun)? Here is a reunion photo with close friend Hyun-seung".

Fans who have seen the picture have left responses such as, "What a new combination", "G-Dragon's expression is so cute" and "What a warm and nice photo".

G-Dragon recently made his musical comeback as a duo unit with fellow Big Bang member T.O.P (Choi Seung-hyun), promoting their title track "HIGH HIGH" and "OH YEAH" from their album "GD&TOP" since its release on December 15.

Hyun-seung was originally a trainee under major talenthouse YG Entertainment but made his debut as a member of BEAST after being eliminated from an audition selecting members of Big Bang.

He recently released the R&B pop song "let it snow" with Lee Gi-kwang which is one of the tracks from BEAST's duo unit digital album titled "My Story".

"Big Bang G-Dragon poses with BEAST Hyun-seung on "M! CountDown" "
by HanCinema is licensed under a Creative Commons Attribution-Share Alike 3.0 Unported License.
Based on a work from this source