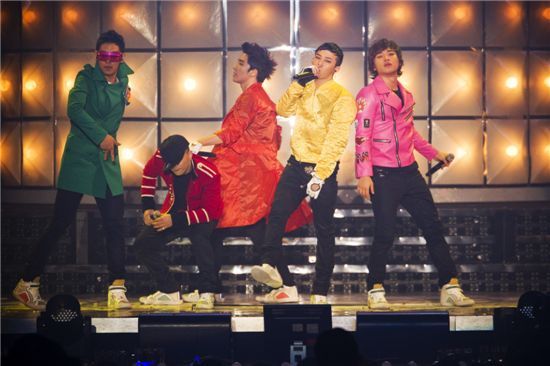 Korean idol group Big Bang's new single "Tell Me Goodbye" has made the top five on Japan's prestigious Oricon music chart on the day of its release.

According to estimates released by Oricon on Thursday, the boy band's latest single "Goodbye" landed at No. 5 in the singles chart upon its local release on June 9.

"Tell Me Goodbye", the group's fourth single in Japan, is also the Japanese theme song to blockbuster drama "IRIS", currently airing in the country on TBS. Member T.O.P. (Choi Seung-hyun) made his acting debut in the series as an assassin.

The Oricon chart entry is the latest in a string of accomplishments the band has been making in Japan; last month, the boys scored a triple win at the MTV World Stage Video Music Awards Japan, picking up trophies for Best New Artist Video, Best Pop Video and Best Collaboration Video.

The week before that, it was announced that Big Bang will be the first-ever Korean dance group to be featured on the main stage at Japan's Summer Sonic Festival 2010, to be held in Tokyo and Osaka on August 7 and 8.

Since their 2006 debut with the single "Bigbang", they have been considered huge cultural icons for Korea's younger generation in not only in music but also fashion.

They made their debut in the Japanese pop market in June 2009 and were named Best New Artist at Japan Yusen Awards and Japan Record Awards at last year's year-end ceremonies.

"Big Bang's "IRIS" single ranked No. 5 on Oricon chart"
by HanCinema is licensed under a Creative Commons Attribution-Share Alike 3.0 Unported License.
Based on a work from this source