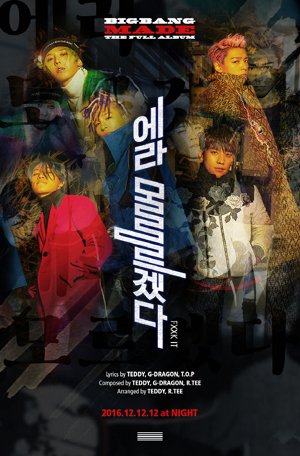 K-pop boy band Big Bang will release their third full-length album for the first time in eight years next Monday.

The album will contain previously released hit singles such as "Bang Bang Bang", "Loser", "If You" and "We Like 2 Party", as well as new songs.

As T.O.P (Choi Seung-hyun), the band's leader and rapper, will start his military service in February next year, their new album and activities are receiving more attention from local and foreign fans than ever before.

To respond to the fans' expectations, they will appear on a variety of entertainment shows including MBC's "Infinite Challenge" and "Radio Star" and perform at SBS'' year-end music awards on Dec. 26.

The group will also stage concerts at Gocheok Sky Dome in Seoul on Jan. 7 and 8 next year.

"Big Bang to Release 1st New Full-Length Album in 8 Years"
by HanCinema is licensed under a Creative Commons Attribution-Share Alike 3.0 Unported License.
Based on a work from this source