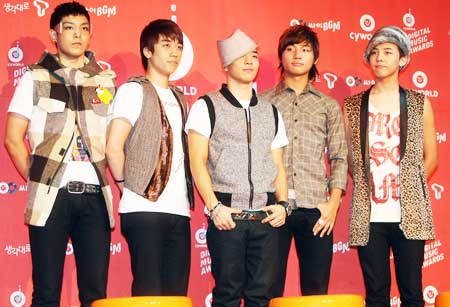 The five-member iconic boy band has been preparing the new album for the past two years and it will be released on Feb. 24. The band will officially return to its fans in a large-scale concert "2011 Big Show" slated for Feb. 25 to 27 at the Gymnastics Stadium at Olympic Park which can accommodate some 40,000 spectators.

YG said that the group has chosen to make their comeback at the concert because the members want to perform their new songs live for the first time for their fans.

Until recently the band members have focused on a variety of individual activities both in Korea and Japan.

The members have been pursuing independent acting and singing careers. G-Dragon, the leader of the group, released his first solo album in 2009 while Taeyang saw his first album take the first and second spots in the iTunes R&B/soul charts in Canada and the United States respectively.

T.O.P. (Choi Seung-hyun) grabbed the best new actor award for his role in the film "71-Into the Fire" at the Blue Dragon Awards last year after successfully starring in hit drama "IRIS" in 2009.

Daesung is currently shooting the drama "What's Up" written by Song Ji-na while Victory will release a mini album with songs he has written on Jan. 20.

Last year, the group won honors at the Japan Record Awards and plans to hold a concert tour in Japan in May.

"This 'Big Show' will be a special opportunity for the members to showcase their growth after having achieved individual success. The concert will be full of brand new numbers performed by each member", YG said.

"Big Bang to return with new album"
by HanCinema is licensed under a Creative Commons Attribution-Share Alike 3.0 Unported License.
Based on a work from this source