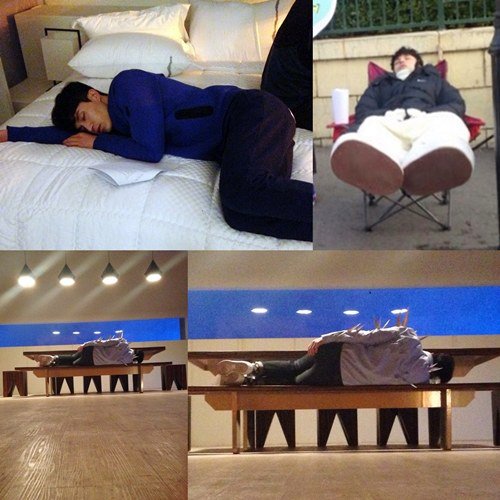 Actor Lee Dong-wook who is currently acting in the KBS 2TV drama "Blade Man" Joo Hong-bin, posted pictures on his Facebook saying, "I'm sleepy. It's tough staying up all night, but I am working hard".

Pictures show him taking naps in-between breaks on the set of the drama. He's even napping on a fold-chair outside in his polar bear costume.

When Lee Dong-wook is in his 'blade' costume he can't sit or lay down properly so he's laying down sideways on a long bench. It really shows how much work he's putting into the drama while trying to make it work with the rest of the team.

""Blade Man", Lee Dong-wook spotted sleeping in corners"
by HanCinema is licensed under a Creative Commons Attribution-Share Alike 3.0 Unported License.
Based on a work from this source