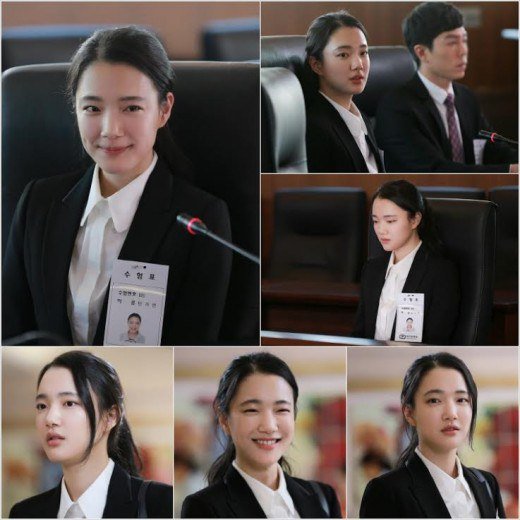 Son Soo-hyeon from the new KBS 2TV drama "Blood" stars as Min Ga-yeon, a cheerful character who only has eyes for Ji-sang and is the only domestic resident doctor at the Tae-min Cancer Center.

Min Ga-yeon makes a lot of mistakes and causes trouble sometimes but she's hard working and well-mannered. She's pretty when she smiles. She thinks of Ji-sang, who chose her, to be her mentor and only has eyes for him.

Despite the fact that Son Soo-hyeon is starring in her first drama, she became the perfect Min Ga-yeon. She put on a neat interview-look and looked lovely like Min Ga-yeon.

Son Soo-hyeon's first scene was taken in a hospital in Gangnam on the 27th. This was her first drama shoot so she was obviously very nervous. However, she smiled her dimple smile and went around saying hello to every one of the staff on site.

Son Soo-hyeon has done a lot to make her character perfect. She's even had acting lessons after being cast and she's been practicing how to make a 'tie' every chance she gets to create a realistic surgical scene. She's also looking up information on the web to build basic medical knowledge.

After her first filming, Son Soo-hyeon said, "I'm sure I messed up somewhere because it's my first time and I'm nervous and shaky. I am doing my best to be the best".

IOK Media said, "Son Soo-hyeon is perfect for the role of Min Ga-yeon who is loyal and bold. We can expect to see lots from her".

"Blood" is a fantasy medical drama produced by Ki Min-soo and written by Park Jae-beom-I.

""Blood" Son Soo-hyeon's lovely instinct "
by HanCinema is licensed under a Creative Commons Attribution-Share Alike 3.0 Unported License.
Based on a work from this source