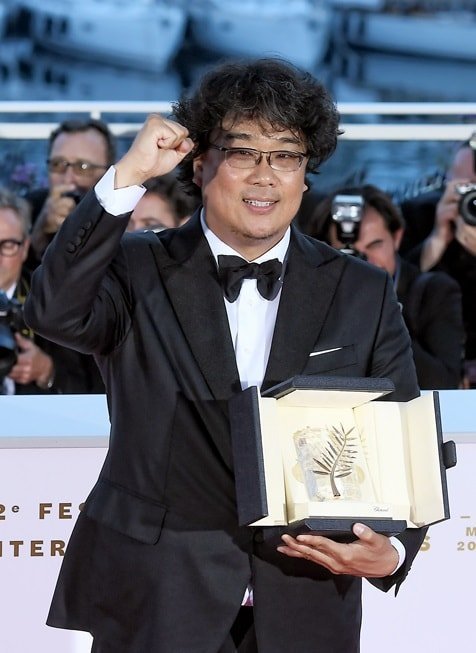 Director Bong Joon-ho poses with the Palme d'Or for his film "Parasite" during a photo call at the Cannes Film Festival in France on Saturday. /Courtesy of CJ E&M

Director Bong Joon-ho won the prestigious Palme d'Or at this year's Cannes Film Festival in France on Saturday for his film "Parasite", becoming the first Korean ever to receive the top prize.

"It's such a unique experience. It's so unexpected", said Mexican film director Alejandro Gonzalez Inarritu, who headed this year's jury. "It took all of us sharing our experiences. We shared the mystery of the unexpected way this film took us through different genres and mixed them and spoke in a funny, humorous, tender way with no judgment of something so irreverent and urgent. It's so global but in such a local film. We were all fascinated by it since we saw it. It kept growing and growing. It was a unanimous decision".

When Inarritu and French actress Catherine Deneuve announced "Bong Joon-ho" as the laureate of the Palme d'Or at the closing ceremony, the crowd erupted in cheers. After receiving the trophy, an emotional Bong thanked the audience in French and paused to bask in the moment. He apologized for not preparing a speech in French, and continued in Korean.

"I was a timid film fanatic who decided to become a film director at the age of 12. I had never imagined that a day would come when I would hold this trophy in my hand", he said. Bong recalled that as a boy, being so shy made him stay at home and watch TV and films all night, dreaming of becoming a film director. "This year marks the 100th anniversary of the birth of Korean cinema, and Cannes has given a big present to Korean cinema", he added.

Bong also singled out actor Song Kang-ho, with whom he has worked continuously for over 17 years and who starred in "Parasite". "I would like to listen to what a great actor and my good companion Song Kang-ho has to say", said Bong as he invited Song to the stage. "I dedicate this glory to all actors in Korea who taught me patience, wisdom and passion", Song said. 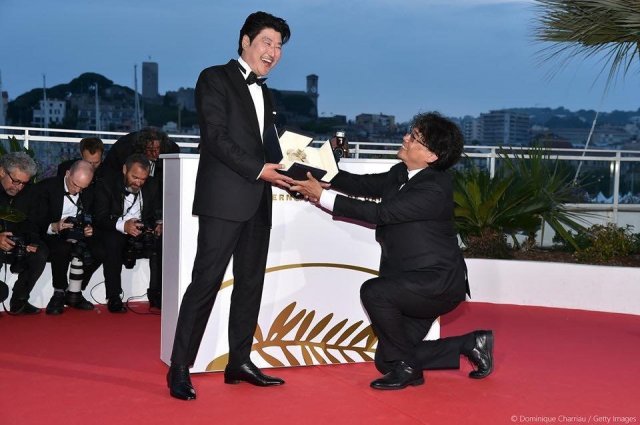 Director Bong Joon-ho (right) kneels down to jokingly present actor Song Kang-ho with the Palme d'Or for their film "Parasite" during a photo call at the Cannes Film Festival in France on Saturday. /Getty Images Korea

Bong made his debut in 1994 with the short film "White Man", and has released numerous highly acclaimed feature films that sharply portray critical social issues of Korean society with satire and humor.

"Parasite" has been pre-sold to 192 countries, which is a new record for a Korean movie. "Parasite" is Bong's seventh feature film, and revolves around two families from opposite social classes whose lives become entwined when a son from a poor family scams his way into a tutoring job in a wealthy family.

"Bong Joon-ho Becomes 1st Korean to Win Palme d'Or at Cannes"
by HanCinema is licensed under a Creative Commons Attribution-Share Alike 3.0 Unported License.
Based on a work from this source