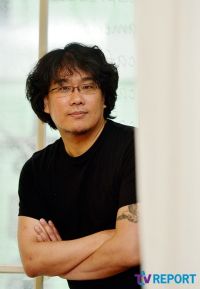 Director Bong Joon-ho picked out a scene which he wants to re-direct the most from "Memories of Murder".

80 more staff and personnel as well as 300 audiences also participated in this event and it was Bong Joon-ho's idea to have them there.

He was asked what he thought was the most embarrassing scene now that he saw it and he said, "There's one where Seo Tae-yoon (Kim Sang-kyung) loses Park Hyeon-gyu (Park Hae-il) and becomes half crazy. He mumbles to himself in the police station and chief Shin (Song Jae-ho) says he's feeling anxious to. The act was amazing but the angle was terrible".

He added, "I feel it's pushing in too directly. It's like it's emphasizing that Seo Tae-hoon is going crazy. I felt my face turn red and if I had a chance to do it again I would step back a little. There's more but I won't say it because it's embarrassing".

Meanwhile, "Memories of Murder" is based on the serial killing in Hwa-seong and is based on the play, "Come See Me". It was released in April, 2003 and gathered over 5 million audiences.

"Bong Joon-ho, "Memories of Murder""
by HanCinema is licensed under a Creative Commons Attribution-Share Alike 3.0 Unported License.
Based on a work from this source