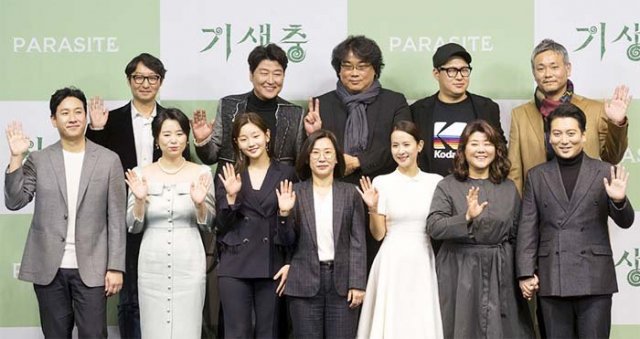 The cast and crew of Bong Joon-ho's film "Parasite" pose for a photo at a press event in Seoul on Wednesday. /Newsis

Bong Joon-ho and the cast of "Parasite" on Wednesday faced a blizzard of cameras after returning to a hero's welcome from their Oscars triumph.

Speaking at a press conference in Seoul, Bong singled out small distributor Neon for special praise. "Neon was a newcomer and relatively small in the industry", he said. "Unlike big players like Netflix, we had to promote the film with a much smaller budget so we worked really hard. We gave over 600 media interviews and over 100 events with audiences".

He said his stars are also now much sought-after in America. He was flanked by cast members Song Kang-ho, Lee Sun-kyun, Park So-dam, Cho Yeo-jeong, Jang Hye-jin, Park Myung-hoon and Lee Jung-eun as well as the producer and crew.

Bong revealed that he is to team up with director Adam McKay of "The Big Short" and U.S. cable network HBO for a TV adaptation of the film.

"There have been reports that Tilda Swinton will join the cast, but it's not true. Nothing has been decided yet", Bong said. "We're just discussing the very basic issues of the series like the direction of the story and its structure".

"It's likely to be limited series of high quality with five or six episodes like HBO's 'Chernobyl' last year", he added.

Asked about his next film project, he said, "I've been working for years to make two other films, and I think making good films is the best I can do for the Korean cinema industry".

"Bong Joon-ho Recalls Road to Oscars Triumph"
by HanCinema is licensed under a Creative Commons Attribution-Share Alike 3.0 Unported License.
Based on a work from this source