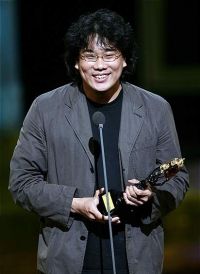 A retrospective of Korea's top name-brand director Bong Joon-ho is headed to Brooklyn, New York, for a showcase at the BAM cinématek from February 25 - March 1. Titled "Monsters & Murderers: The Films of Bong Joon-ho", the retro brings together all of the director's feature films to date with BONG attending the event February 26 and 27.

The showcase is timed to highlight Magnolia Pictures upcoming theatrical release of the director's latest film "Mother - 2009" (2009) across the US in a limited run beginning March 12. The gripping tale of a mother who goes to extremes to clear her son's name when he is arrested for the murder of a schoolgirl, the film will be presented to New York audiences in a sneak preview on Feb. 26 at BAM with BONG holding a Q&A session.

BONG will also hold a talk on his 2006 box-office megahit "The Host" (2006), about the plight of a family after one of its members, a middle-school girl, is taken by a chemically-spawned monster living in Seoul's Han river. BONG's debut feature "Barking Dogs Never Bite" (2000) and sophomore hit thriller "Memories of Murder" (2003) round out the program.