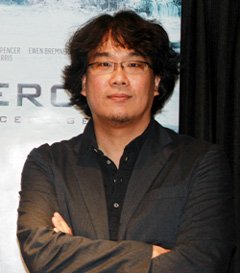 After several early screenings of the post-apocalyptic hit "Snowpiercer" in France in recent days, ahead of its official release in the country, director Bong Joon-ho said he felt like he was bringing the project back to its original roots.

"As I present 'Snowpiercer', based on a comic book that was published three decades ago in France, I feel like a salmon coming home after a long journey upstream", he said at a press event in Paris on Monday.

The movie, which has garnered rave reviews and huge box-office success since its release in Korea in Mid-August, served as the closing film at the Deauville American Film Festival in France last week. It will hit theaters across Europe soon and will be released in 167 countries.

The original comic book will also be re-published in France in time for the film's release. Bong's previous films -- "Memories of Murder", "The Host" and "Mother - 2009" -- did not enjoy much success in France, but Bong expects "Snowpiercer" will change the mold as it was made with an international audience in mind.

When asked about his next move, he said, "I haven't decided what my next project will be, although I'm looking at the script of a big-budget sci-fi movie from the U.S., and I'm also considering my own ideas".

"I also hope to one day set a film on a desert island with veteran actors like Song Kang-ho", he added.

"Bong Joon-ho's 'Snowpiercer' Screened in France"
by HanCinema is licensed under a Creative Commons Attribution-Share Alike 3.0 Unported License.
Based on a work from this source