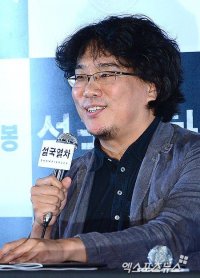 Director Bong Joon-ho, known best for his 2006 monster hit "The Host", which remains the top-grossing film of all time in Korea, will change gears on his next feature project, with a moving but hard-hitting crime-drama tentatively titled "Mother - 2009". Presented at the Hong Kong Asia Film Financing Forum, details of the new project are now available.

Budgeted at $US 5 million, the film centers on a devoted and determined mother up against incompetence and corruption in the police and legal system. When her shy, innocent son is accused of a horrible murder in their neighborhood and nothing can save him, she sets out to uncover the truth and prove his innocence.

The film is to be produced by Barunson Film Division, the company behind Yim Pil-sung's "Hansel and Gretel" and Kim Jee-woon's upcoming "The Good, the Bad, the Weird". BONG shares writing credits with Park Eun-kyo. CHOI Jae-won-I is producer, having produced BONG's previous hit crime-thriller, "Memories of Murder".