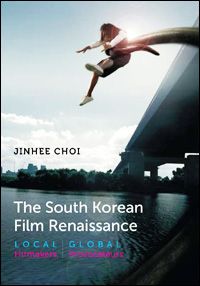 In recent years, it has become more likely for Korean cineastes to be placed under the international spotlight at major film festivals worldwide.

Over the past decade, Korean cinema has proven to be commercially viable both on local and overseas markets, enjoying a renaissance and appealing to cinephiles on the festival circuit.

"South Korean Film Renaissance: Local Hit Makers, Global Provocateurs" written by Choi Jin-hee in English probes how the Korean film industry turned an economic crisis into a cinematic renaissance through globalization based on historical reviews of the industry.

In the late 1990s, the Korean blockbuster established itself as a feasible production/marketing strategy on the domestic market, with the commercial success of such films as "Shiri" and "JSA - Joint Security Area". Since then, box office records have been constantly exceeded by subsequent movies, including "Silmido", "Taegukgi", and "The Host", which attracted audiences of more than 13 million.

Korean cinema has become one of the strongest commercial film industries in the region, outperforming Hollywood at the local box office. In past years, annual paid cinema admissions in the region have more than tripled from 42 million people in 1996 to 148 million in 2005 during which time Hollywood's market share was cut in half, dropping from 77 percent to 36 to 38 percent. By 2005, Korea had become the fifth largest theatrical market in the world, with $890 million in box-office receipts.

How was this possible? The book addresses the influence of Korean cinema on the world film scene as it adapted to regional and global demand by modernizing industry practices and elevating film production value.

With the country's rapid economic growth in the 1970s and 1980s, the Korean government was under pressure to liberalize its import policies and financial markets for all industries, including film.

The anxiety over the large influx of foreign films, however, was slowly overcome with a generational shift within the industry. The relaxation of restrictions on production, in conjunction with the inauguration of a civilian government, provided an opportunity for independent production companies and a new generation of directors ― often identified as the "386 generation" whose members were born in the 1960s and attended college in the 1980s ― to propel an industrial boom unprecedented in the history of Korean cinema.

As French New Wave directors reshaped France's film culture and industry in the 1960s and Hong Kong New Wave directors with their sensibilities launched the golden era of Hong Kong cinema in the 1980s, the "386 generation' directors of similar political predilections contributed to the current industry boom by quickly adapting themselves to industry demands.

The concept of generation implies that a demographic group tends to manifest similar attitudes or stances toward its national and cultural history because of its shared experience.

The current renaissance is a result of the increasing globalization of the world film industry and of Korean's striving for cultural visibility and also an attempt to reach a wider regional global audience.

The book gives an exact historical chronicled assessment of the Korean film industry by articulating how it has transformed narrative and style in genres ranging from gangster films to high school movies, horror and romance in detailed chapters.

Under the rapid transformation that the Korean film industry underwent, major production trends and cycles are examined with an eye toward their economic, cultural and aesthetic ramifications: blockbusters, gangster cinema, romance films, teen flicks and high-quality movies that attempt to be both commercially viable and artistically competent.

The first chapter looks into the ways in which the Korean film industry has dealt with the industry crisis that resulted from pressure from the United States and other countries.

The second chapter explores characteristics of Korean blockbusters, wrestling with such questions as to why many successful films portray the history of Korea, and why Korean science-fiction blockbusters have all failed at the box office?

The third chapter traces the resurgence of gangster cinema in East Asia and highlights some of the similarities and differences between Hong Kong and Korean gangster films.

The fourth chapter examines romantic comedies which have undergone transformations with a focus on gender, featuring eccentric, hysterical heroines in such films as "My Sassy Girl" and "My Tutor Friend". It also discusses the romantic drama which often utilizes spatial and temporal distance as an obstacle to the union of couples.

High school has become a transgeneric setting for films of various cycles, including gangster films such as "Beat", and horror offering "Whispering Corridors". The fifth chapter examines how adolescent films achieve both intergenerational and intra-generational appeal by evoking nostalgia as well as critiquing Korea's current education system.

The sixth chapter focuses on high-quality films, a trend that began with the commercial success of Bong Joon-ho's "Memories of Murder". Advocates of high-quality films attempt to differentiate their filmmaking from both ends of the production hierarchy: low-budget comedy and spectacle driven blockbusters. Such discourse aims to correct the public's misconception that commercial films cater to an audience's quickly changing tastes and thus lack aesthetic merit.

The last chapter details with the active negotiations between Korean New Wave directors and the commercial film industry, citing Kim Ki-duk, Park Chan-wook and Hong Sang-soo who are all linked to the aesthetic label.

"Book Features Korean Film Renaissance"
by HanCinema is licensed under a Creative Commons Attribution-Share Alike 3.0 Unported License.
Based on a work from this source