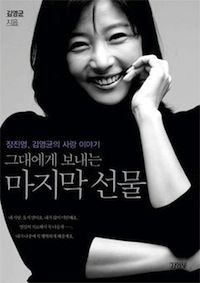 Kim Young-kyun, the widower of the actress Jang Jin-yeong, who died of stomach cancer in September, is to publish a memoir recalling their 600 days of romance this Friday. GimmYoung Publishers on Monday said it is in the last stages of printing the book for Friday's release.

The book recounts how Jang and Kim met for the first time on Jan. 23, 2008, how romance developed, what they went through together after Jang was diagnosed with stomach cancer in September last year, and Kim's feelings of bereavement.

It also includes for the first time a detailed account of their wedding. When it became clear that Jang's days were numbered, the two went to the United States and married in a church in Las Vegas on July 26. Never-before-seen pictures from the wedding will also be included.

Returning to Korea, Kim registered their marriage at the Seongbuk District Office in Seoul on Aug. 28. Jang died four days later. At the time, Kim said, "This was the only time I could have Jang walk down The Isle. I wanted to give her the wedding as a present". He says the book is a candid account of many stories he kept to himself. "It contains everything that happened between us -- the fateful encounter, proposal, wedding and marriage registration, the last present I was able to give her".