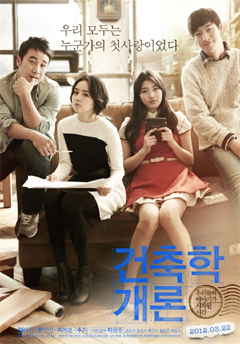 A copy of the romantic box-office hit "Architecture 101" was illegally released on several file-sharing websites on Wednesday.

Myung Film, the production company, said the bootleg is slightly different from the screen version, and it deleted copies as soon as they were uploaded on the internet and asked police to investigate.

"Architecture 101", directed by Lee Yong-joo-I, had drawn over 3.9 million moviegoers in 593 theaters since its release on March 22 and is expected to hit the 4 million mark this weekend.

"We believe the bootleg isn't a 'cam version'" filmed off the screen in a theater, said Kim Myung-hee, a director at Myung Film. "It's possible that it was an inside job, but we're trying to find who uploaded it and report them to cyber police".