Borders Blur for Director Bong as Cannes Calls for 'Tokyo!' 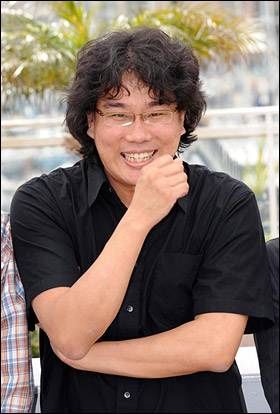 For Bong Joon-ho, the Cannes International Film Festival is an extra-special event. His 2006 film "The Host", which made Korean history by drawing some 13 million viewers, screened at the Directors' Fortnight series during the French film gala. It's widely believed that the strong response it received there, though not an official Cannes event, was behind the movie's huge success back home.

Cannes smiled upon Bong again this year, inviting his latest work "TOKYO!" to screen on the opening day of the Un Certain Regard section. The omnibus film directed by Bong and two other world-famous directors, Leos Carax and Michel Gondry, has attracted keen interest. A press preview at the Salle Debussy on Thursday was packed with film reporters and critics from around the world.

Working with the two French filmmakers was an extraordinary experience for the 39-year-old Bong. "It felt a little unreal, to be honest", he says. That's understandable considering that Carax, 48, famed for works such as "Mauvais Sang (Bad Blood)" from 1986 and "Les Amants du Pont-Neuf (The Lovers on the Bridge)" from 1991, was one of the leading directors of the 1980s, when Bong was just a young, passionate would-be director. The renowned Gondry, 45, is probably best known for his 2004 film "Eternal Sunshine of the Spotless Mind".

While some expressed disappointment that no Korean films were invited to the In Competition section of Cannes this year, "TOKYO!" offers evidence that Korean film is breaking free of nationalistic concerns. "The special effects for "The Host" were entrusted to teams from Australia and New Zealand, so it's been a while since national boundaries have been blurred in the film world, where everything is mixed culturally and industrially", Bong said. "'TOKYO!' is no exception".

After the interview, the director ran into Carax and Gondry in the lobby of the hotel, on their way to a final check of the film print. The three embraced, showing that here, at least, nationality has little meaning.
____________
Bong Joon-ho poses during a photocall for his film 'Tokyo !' at the 61st Cannes Film Festival in Cannes, southern France, on Thursday. /AFP