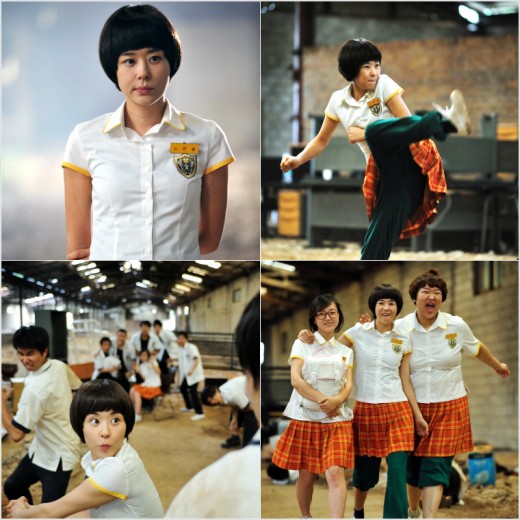 In the upcoming SBS drama "Protect the Boss", Choi Kang-hee plays the role of Noh Eun-seol who is a representative unemployed youth but becomes a secretary for a plutocrat company.

In the drama shoot that was taken place last 14th, Choi Kang-hee appeared as a 'gangster' with choco shroom cut hair and sweatpants under her uniform.

Also known as Balsan-dong's Noh Legend, Noh Eun-seol go one against 10 with the boys who bully her friend.

She had been trained for this since a month ago and although the shoot went on for 5~6 hours, she didn't show any signs of exhaustion and threw her fists around, creating a new 'loco action'.

The production said, "Loco queen Choi Kang-hee displayed her unique comic action and created a perfect scene. Laughter never ends on the site as Choi Kang-hee, Ji Sung, Park Young-gyu and others do their best at comic acting".

""Boss" Choi Kang-hee's choco shroom hair "
by HanCinema is licensed under a Creative Commons Attribution-Share Alike 3.0 Unported License.
Based on a work from this source