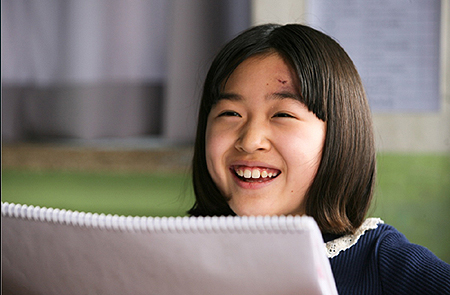 - "Silenced" tops the charts and raises voices of protest

The two weeks lasting from Sept. 22 to Oct. 4 were witness to a remarkable box office phenomenon in the form of the film "Silenced". Based on a shocking real-life incident in which young students at a school for the deaf were sexually assaulted by their teacher and principal, the film has outraged and mobilized viewers, who are demanding that justice be served and new laws be passed to protect vulnerable children. The popular phenomenon surrounding the film, including extensive coverage by the news media, has caused many to take note of the power and influence of the film medium.

The case was not unknown before -- in fact the film is based on a book by Gong Ji-young, one of Korea's best known novelists -- but the strong acting and powerful execution of the film has caused sensational word of mouth among viewers. In its first two weeks on release the film has sold over 2.7 million tickets, and given the fact that its box office was considerably higher in its second weekend as opposed to its first, "Silenced" is expected to develop into one of the year's highest grossing films.

Two other high-profile local releases hit screens on September 29: "The Client", a courtroom drama starring Ha Jung-woo, Jang Hyuk and Park Hee-soon; and "Countdown", a thriller starring Jung Jae-young and Cannes best actress winner Jeon Do-yeon. Of the two, audiences showed a clear preference for "The Client", with the film notching 826,287 admissions compared to 267,912 admissions for "Countdown" over the same period.

Domestic films in general turned in a strong showing, with the top four grossing films all coming from Korea. Box office smash hit "The War of Arrows", a.k.a. "Arrow, The Ultimate Weapon" which has grossed a phenomenal 7.2 million admissions since its release on August 10, continues to exert its influence at the box office. Meanwhile the highest grossing import was Steven Soderbergh's Contagion, which took 214,249 admissions in two weeks to land at #5.

"Box office, Sept. 22 - Oct. 4"
by HanCinema is licensed under a Creative Commons Attribution-Share Alike 3.0 Unported License.
Based on a work from this source