[Broadcasting Chart] dramas break down the 'wall of time' 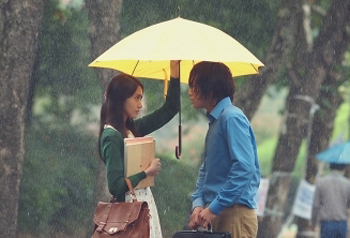 Fantasy dramas like "Love Rain" and "Faith" to be continuously programmed

The drama industry has been busy since the start of the year. MBC mini series, "The Sun and the Moon" so easily just jumped over 20%. KBS 2TV drama "Brain" ended with honor and "Dream High 2" is coming up next. The common factor between all three broadcasting stations and is 'time machine'. Historical or modern dramas, they all go back and forth the past and future.

"Love Rain" that is most likely to be programmed to KBS 2TV, is a love story that travels back and forth the 1980's and 2010. The love between university students Seo In-ha and Kim Yoon-hee from the 1980s, leads to the love of Seo Joon and Kim Ha-na in 2010. Jang Keun-suk and Yoona from Girl's Generation are carrying out 2 roles at once.

Producer Yoon Seok-ho said, "I wanted to tell a love story that never changed even if time goes". The element is that the feelings remain the same despite the time travel. A spokesperson for "Love Rain" said, " A modern person will be crossed over from the old landmark of Daegu to the high rise buildings. The imagery should be very pleasing to see with three-dimensional effects".

The same goes for new MBC weekend drama "Faith" which is to be broadcasted after "God of War". This drama was an issue because producer Kim Jong-hak and writer Song Ji-na from the SBS drama "Sandglass" came together for this and actress Kim Hee-sun was chosen as the lead character.

Details weren't passed on yet. However, the Korean medical drama that travels through the Koryeo and modern times, was enough to draw the attention of viewers. A spokesperson from the MBC drama department said, ""The Sun and the Moon" only borrowed the background of the Chosun times and is all made up of imaginary characters and events. "Faith" should also travel back and forth modern and historical times to complete a unique picture".

"The Rooftop Prince" that will be shown after the SBS drama "Take Care of Us, Captain", is a fantasy romance about a prince who turns up in Seoul 300 years later to complete his unfinished love.

TV Chosun drama "Operation Proposal" is also a 'time traveler'. It talks about a man (Yoo Seung-ho) who returns to the past to find his first love.

Some are saying that 'time traveling' has been a new element in dramas recently. The trend in dramas is turning into fantasies.

An outsourcing production spokesperson told Sports Hangook on the phone, "We need a multilateral system and not fragmentary ideas to give the viewers new fun and interest. There is a limit to how much a character can express so we are looking m ore towards producing and script".

"[Broadcasting Chart] dramas break down the 'wall of time'"
by HanCinema is licensed under a Creative Commons Attribution-Share Alike 3.0 Unported License.
Based on a work from this source