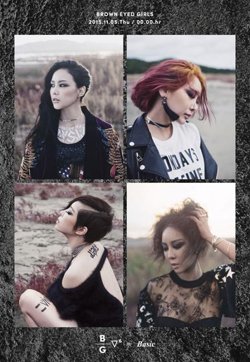 Members of the group reunited after focusing on their individual careers for more than two years.

Teaser photos for the album unveiled on Tuesday show each of the four members with thick smoky makeup and provocative looks.

"The choreography for the new album is the toughest we have done so far", Ga-in said.

All four original members have remained in the group since they debuted in 2006.

"We didn't intend to, but we stuck together because we had the same goal", said Narsha, another member of the group.

Their new album will be released on Nov. 5.

"Brown Eyed Girls to Release Album Next Month"
by HanCinema is licensed under a Creative Commons Attribution-Share Alike 3.0 Unported License.
Based on a work from this source