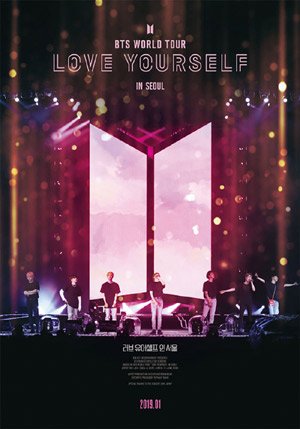 "Love Yourself in Seoul" will be released in 3,800 theaters in 95 countries on Jan. 26, according to the band's management agency, Big Hit Entertainment on Wednesday.

The film features BTS' concerts from Aug. 25 and 26 of last year at Jamsil Olympic Stadium in Seoul, where they kicked off their world tour. Unlike their previous film, "Burn the Stage: The Movie", which mainly shows behind-the-scenes footage of their world tour, the new one is solely dedicated to the band's performances, which can be viewed on a three-sided screen.

Tickets are already on sale in some cities, including Frankfurt, Germany, and are selling out quickly.

In Korea, tickets for all 16 premiere screenings for Jan. 26 and 27 are sold out. At the premieres, fans will be allowed to bring light sticks and sing along, as if they were at a live concert.

"BTS' Concert Film to Hit Theaters Worldwide Next Week"
by HanCinema is licensed under a Creative Commons Attribution-Share Alike 3.0 Unported License.
Based on a work from this source