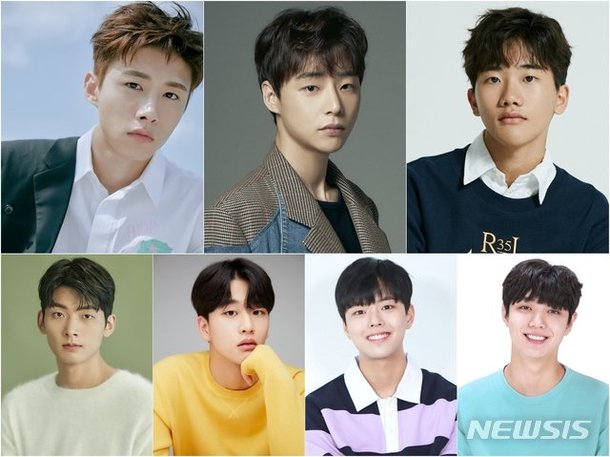 "YOUTH" deals with the growing up of seven precarious and immature boys. The process of growing into precious beings by sympathizing with each other's pain will provide fresh emotions and empathy.

"YOUTH" is directed by Kim Jae-hong-III and written by Kim Su-jin.

Earlier, news of BTS's production of a drama about the worldview of 'the happiest moment of their lives' drew much attention. BU (BTS Universe) is a worldview that has a different narrative from a real artist and has unfolded various stories in ways of metaphor and symbolism. Based on BU's basic settings, the drama has been adapted to the drama genre and it depicts the school days and growth narratives of seven boys in the worldview.

Seo Ji-hoon plays the role of Kim Seok-jin, a boy trapped in the shadow of his lawmaker father, who looks perfect but is not good at expressing emotions. Seo Ji-hoon, who starred in "To All The Guys Who Loved Me", "Meow, the Secret Boy" and "School 2017", has lived in his father's plans, but faces emotions that he has shunned and buried through the boys he meets at his new school.

Ro Jong-hyun transforms into a boy with a bloody rumor, Min Yoon-ki. Rumors that he killed his mother and set fire to his house follow Min Yoon-ki, who is blunt but warm inside. Ro Jong-hyun, who has shown off his charm in "Kkondae Intern" and "Life on Mars", shows the process of healing wounds by transforming into a boy to whom his mother was everything but finds peace in an old piano.

Ahn Ji-ho plays the role of Jeong Ho-seok, a dancing machine with a positive mind, a boy abandoned alone in the world. Although there is the pain of being abandoned at an amusement park as a child, he has brighter energy than anyone else. Ahn Ji-ho, who starred in the films "The House of Us", "Inseparable Bros" and the drama "Nobody Knows" will show a colorful act that combines brightness and darkness.

Seo Young-joo plays Kim Nam-joon, a boy whose dream is to live a normal life. He is a tough boy who grew up early in the harsh reality that even dreaming has become a luxury. He is a responsible person who does all kinds of part-time jobs but never misses first place at school.

The role of Park Ji-min, a boy who hides an unspeakable secret amid a bright smile, is played by Kim Yoon-woo. His family's overprotection and false childhood keep him traumatized, making him confused about who he really is.

Jung Woo-jin-I plays Kim Tae-hyung, a dangerous boy full of wounds living with his drunk father. He had the innocence of believing that his father, who had changed with his mother's running away, would come back someday with the kind image he used to play catch with.

A boy who is curious about the reason for his existence, Jeon Jeong-gook, is played by Jeon Jin-seo, who left a deep impression with the drama "The World of the Married". Jeon Jeong-gook, who does not feel happiness among unstable families, is a boy who is indifferent to both the meaning of life and death.

The production team of "YOUTH" said, "It is a work that has to capture the reality of seven boys in a real and pleasant way while also portraying complex psychology. Understanding the characters, acting skills, and chemistry between the characters were more important than anything else. We completed the lineup with young actors and newcomers with fresh visuals that will maximize the character's charm. Please look forward to their synergy".