Bullying on the Rise in Elementary Schools 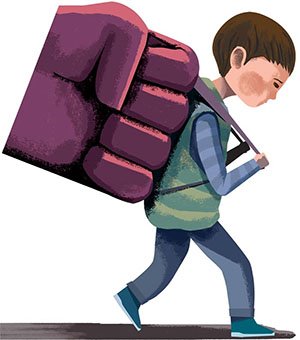 Bullying is more prevalent in elementary school than in middle and high school, according to a survey of about 90,000 fourth to 11th graders across the country published by the Education Ministry on Thursday.

However, violence in middle and high schools is often more serious than among younger children.

It now takes the form not only of physical violence but also verbal abuse and cyberbullying. More and more children hit or swear at their friends and even teachers, according to the ministry. Defiance of a teacher's authority, including hitting or groping, tripled in elementary schools from 58 cases in 2013 to 167 in 2017. But there has been a drastic decrease in middle schools from 2,937 to 1,008 and in high schools from 2,567 to 1,391.

The surge in violence in elementary schools may be due to rapid physical growth among children and their easy access to pornographic and violent content online.

One elementary-school teacher in Seoul said, "It seems that children have become insensitive to verbal abuse or violence, considering it a prank or fun if they've been exposed to it from a young age".

But the spike may also be due to the fact that children are more sensitive to violence and their parents intervene more aggressively. "These days, children tend to take issue with anything uncomfortable and call it violence", the principal of one elementary school in Seoul said. "Middle and high school students like to solve slight quarrels among themselves, while elementary school children tend to report them to parents or teachers".

"Bullying on the Rise in Elementary Schools"
by HanCinema is licensed under a Creative Commons Attribution-Share Alike 3.0 Unported License.
Based on a work from this source