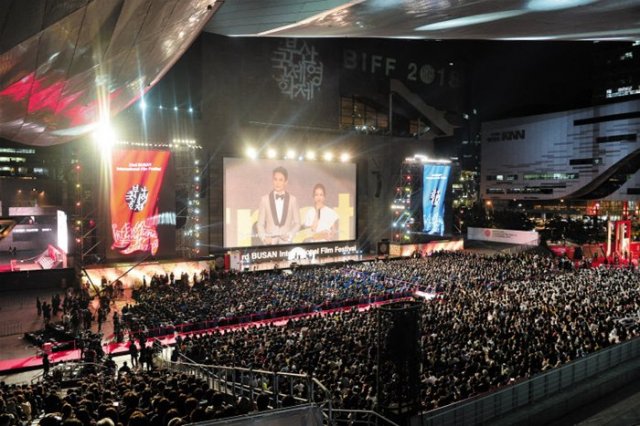 The opening ceremony of the Busan International Film Festival is held in Haeundae, Busan on Thursday.

The 23rd Busan International Film Festival kicked off in the southern port city on Thursday. It opened with a performance by Japanese composer and pianist Ryuichi Sakamoto with actors Kim Nam-gil and Han Ji-min as hosts.

This year's festival features 323 films, the most in its history, from 79 countries over the next 10 days until Oct. 13.

The opening film was "Beautiful Days - 2017" directed by Jero Yun. It depicts the hardships faced by a North Korean woman, played by Lee Na-young, who escapes the reclusive country but is trafficked into a marriage with a Korean-Chinese man.

In an attempt to make the festival more accessible, this year's edition focuses on diversity and popularity, featuring many films that have been well received at other film festivals worldwide.

Tickets to "First Man" by "La La Land" director Damien Chazelle sold out within a minute after online bookings opened. Other notable films include "Roma", written and directed by Alfonso Cuaron for Netflix and the winner of the Golden Lion at the 2018 Venice International Film Festival, and "Capernaum", written and directed by Nadine Labaki, which won the Jury Prize at Cannes this year.

It may come as a disappointment to some fans that fewer world famous directors and actors are visiting this year and there are not that many films making world premieres at the festival. Japanese film director and animator Mamoru Hosoda, Yuen Woo-ping, the legendary martial arts choreographer and film director from Hong Kong, and U.S. film director Jason Bloom are some of the big names visiting Busan this year.

But as typhoon Kong-rey is forecast to bring heavy rain to the southern city over the weekend, some outdoor programs have been canceled and moved to indoor venues.

"Busan Int'l Film Festival Gets Under Way"
by HanCinema is licensed under a Creative Commons Attribution-Share Alike 3.0 Unported License.
Based on a work from this source