Campus romance to pull at 'Heartstrings' 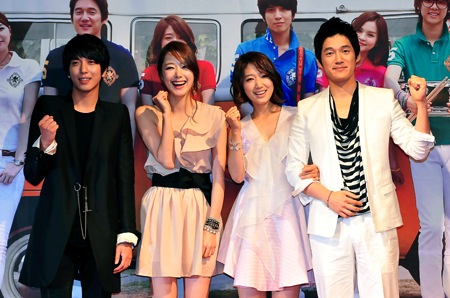 From left, Jung Yong-hwa, So Yi-hyun, Park Shin-hye and Song Chang-eui pose for a photo at a press conference for "Heartstrings" at a Seoul hotel last Thursday. / Courtesy of MBC

The life and love of university performing arts students will hit the small screen today through MBC's new drama "Heartstrings". 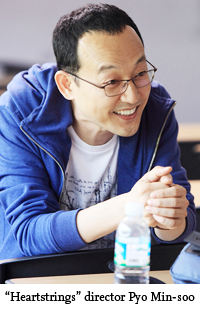 "The word 'youth' reminds me of many things. I will portray the sweat and passion of artistic people in this drama", Pyo said during a press conference last Thursday. "This drama is about people dreaming of art".

Pyo is known for expressing the delicate world of professionals such as "Full House" (2004) and "Worlds Within" (2008).

Heartthrob Jung Yong-hwa, CNBLUE's singer and guitarist, plays Lee Sin, an applied music student and guitarist of a school band "The Stupid". It's his second time to star in a television drama, following "You're Beautiful" (SBS, 2009).

The singer-actor's eyes lit up when he talked about the role.

"I fell in love with my character and researched him a lot. He might seem curt and cold, but he is dedicated to music, his family and this dance professor", he said.

"I got the idea from Kaede Rukawa in hit manga 'Slam Dunk', who only knows basketball".

Snappy actress Park Shin-hye once again performs together with Jeong after "You're Beautiful".

Park plays Lee Gyu-won, a student of Korean traditional music playing the "gayageum" (traditional 12-string instrument). She falls for Lee Shin after watching his band, but her feelings take an unexpected turn when she is chosen as the heroine of the school's 100th anniversary show.

She actually practiced the gayageum for about a month to play the instrument in the drama herself.

"I've got calluses and blisters on my hand, but at least, I can play the instrument enough for it to appear authentic on screen", Park said.

The Korean title for the drama is "You've Fallen for Me", but the production came up with a totally different English title "Heartstrings", which recalls the instruments they play - the guitar and gayageum.

Song Chang-eui plays Kim Seok-hyun, a famed director from Broadway who returns to his alma mater to direct the centennial performance. When he returns to the school, he meets ex-girlfriend Jeong Yun-su, who left him to pursue her dance career but gave up due to injury.

The drama is co-produced by the Seoul Institute of the Arts, which provided its campus for filming. Song is a graduate of this arts-specialized university and returned to the campus to shoot the drama.

"The campus was moved from downtown Seoul to the current Ansan location when I was at the school. The classrooms, library and the atmosphere made me feel nostalgic", Song said. 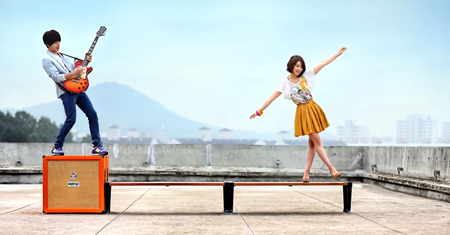 Pyo thinks the student-professor relationship is a reciprocal one.

In the drama, the characters will grow through the 16 episodes, learning from each other whether they are students or teachers, he said.

The drama has already been sold to some eight countries before airing, including Japan, China and North America.

"Jeong and Park's popularity abroad ignited overseas sales of the drama", an official of JS Pictures, the production company, said.

The show airs at 9:55 p.m. on Wednesdays and Thursdays on MBC.

"Campus romance to pull at 'Heartstrings'"
by HanCinema is licensed under a Creative Commons Attribution-Share Alike 3.0 Unported License.
Based on a work from this source