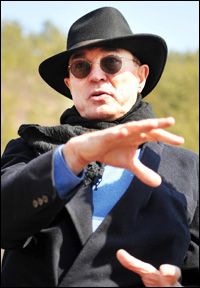 The Korean government has unveiled an ambitious plan to attract over 10 million foreign visitors in 2011, up sharply from this year's 8.8 million, by promoting itself as an attractive tourist destination.

The Korea Tourism Organization (KTO), a state-run tourism promotion body headed by CEO Lee Charm, is at the forefront of the campaign, expecting soaring numbers of Chinese tourists to help it achieve its objective as the number of Japanese visitors has stagnated over the past few years.

But its slogan of drawing 10 million foreigners is seeing an awful start as the number of Chinese people coming here during the upcoming Lunar New Year holiday from Feb. 2 to 8 is projected to plunge sharply, compared to the same period last year.

The holiday is the busiest travel season for middle-and upper-class Chinese visitors, tourism industry watchers here say, stressing that whether Korea attracts 10 million foreigners from abroad this year or not will be largely determined by how many visitors it brings in from the mainland during the seven-day holiday.

Travel agencies here say that the number of Chinese tourists scheduled to come here during the holiday will drop by as much as 50 percent from last year. In 2010, the nation attracted a record number of travelers from the world's second largest economy during the Lunar New Year holiday, which lasted from Feb. 13 to 19.

Hanjin Travel, one of the major tour agencies catering to inbound foreign tourists, said the number of Chinese visitors will drop sharply during the upcoming holiday as more became reluctant to come here, citing North Korea's shelling of Yeonpyeong Island, and the spread of foot-and-mouth disease (FMD) and bird flu.

"We expect a fewer Chinese people to visit here over the eight-day holiday because many feel unsafe, following the North's attack on the island in the West Sea and the heightened military tension between the two Koreas. Additionally, the spread of FMD and bird flu are dampening our efforts to bring Chinese tourists into the country", said a Hanjin Travel official who is in charge of marketing.

She then said the number of Chinese people coming here via her company will go down by about 50 percent, but declined to provide exact numbers.

Mode Tour, another large travel agency, echoed Hanjin's view, saying that Chinese travelers during the upcoming holiday will fall sharply from last year. "We brought in about 2,000 Chinese visitors during the 2010 Lunar New Year holiday. But for this year, the figure will likely be halved to around 1,000 as more Chinese people feel uneasy about their safety here, following the North's military attack in November", the agency's spokeswoman said.

The KTO admitted that the North's attack on Yeonpyeong Island and the spread of FMD have negatively affected Korea's efforts to attract Chinese and other foreign tourists over the past several months.

"In December, we failed to draw as many Chinese and foreign visitors as we had initially hoped, due largely to the rising military tension on the Korean Peninsula. But the situation has improved since the beginning of the year. But we expect the number of Chinese visitors during the upcoming holiday to increase at a much slower rate", said Park Jeong-ha, general manager of KTO's China team.

Park said more Chinese visitors have come here individually, rather than in a group, organized by travel agencies, as eased visa restrictions last summer have encouraged them to venture around the country on their own. "We are positive that the number of Chinese visitors for the whole year will exceed that of 2010", he predicted.

"Can Korea draw 10 million foreign visitors this year?"
by HanCinema is licensed under a Creative Commons Attribution-Share Alike 3.0 Unported License.
Based on a work from this source