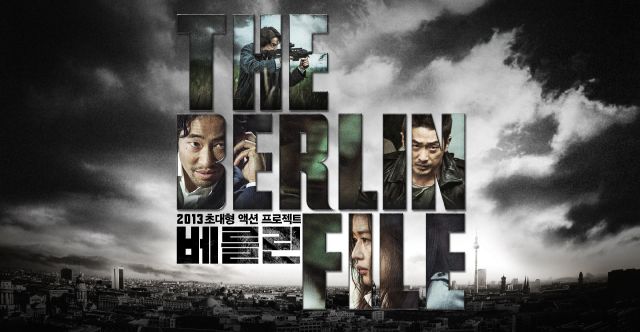 CINEASIE Creatives is pleased to announce the simultaneous North American and Korean release of "The Berlin File" (2013), South Korea's mega action thriller written and directed by the masterful Ryoo Seung-wan. The film, by CJ Entertainment, centers on a battle between spies from North Korea and South Korea, with a tragic love triangle simmering beneath the surface. The Montreal public can discover the visual pyrotechnics of Korea's greatest action auteur on February 15th at Cineplex Forum.

"The Berlin File" features an incredible lineup of Korea's most celebrated actors, with Ha Jung-woo ("The Chaser", "The Yellow Sea", "Nameless Gangster") starring as a North Korean " ghost " agent in Berlin who is betrayed and cut loose when a lucrative arms deal is exposed. Together with his wife, a translator at the North Korean embassy in Berlin played by Jun Ji-hyun ("My Sassy Girl", "The Thieves", "Blood: The Last Vampire"), they struggle to escape Berlin alive. The couple is pursued relentlessly by both North and South Korean operatives, played by Ryoo Seung-bum ("The Unjust", "Crying Fist", "Arahan") - the director's brother - and Han Suk-kyu ("Shiri", "Green Fish", "Christmas in August"). Secretly watching the deal go down is an embattled South Korean intelligence chief, as well as the North Koreans and the United States CIA, who are all left trying to unravel this tightly wound mystery. Inhabiting the tinderbox of the North-South Korean conflict, the four protagonists must be prepared to fight to the death for their allegiances, but to whom they are loyal is another question. As much a love story as it is a fast-paced tale of large-scale espionage, "The Berlin File" is about romance and power in a tension-filled political landscape that has intrigued and eluded North Americans for decades.

Ryoo Seung-wan, who is known for his genre-bending films with breathtaking action sequences, says he wanted to make "a realistic, fast-paced, Korean-style espionage action film about South Korean agents discovering North Korea's secret accounts and how political dynamics between the two Koreas get involved". On an emotional level, he says he focused on the solitude and sorrow of those who live as secret agents: "I wanted to tell a story about human beings who are defined by dangerous secrets bigger than their own lives". He was inspired by the parallels between Berlin's political history and that of Korea: "I really liked reading espionage novels as a boy and I remember a line that said six out of ten people living in Berlin were spies. The city seems to be shrouded in mystery and filled with conspiracies", he says.

"The Berlin File" quickly became the most popular preview screening since "The Host" in 2006, according to the Korea Film Council. It opened nationwide in Korea, having already racked up more than 2,240,000 views in the first box office week. Screen International says it is "one of the most high profile South Korean releases of early 2013", praising the choreography, sets and photography as "spectacular". The film is expected to surpass all of the box office records in Korea; the biggest box record previously was "The Thieves" (2012) with 13 million admissions.

Budgeted at US$9 million, Ryoo shot the film almost entirely on location in Europe. He brilliantly captures the eerie chill of post-cold-war Berlin. Filming began in April 2012 on a film set in Namyang, south of Seoul. After wrapping there, cast and crew relocated to Berlin and Latvia in early May 2012, including locations at Brandenburg Gate, the American Embassy, and the Holocaust Memorial. Interestingly, nearly half of the film is in English; American screenwriter Ted Geoghegan was hired to construct and polish the film's English dialogue, based on Ryoo's translated Korean text.